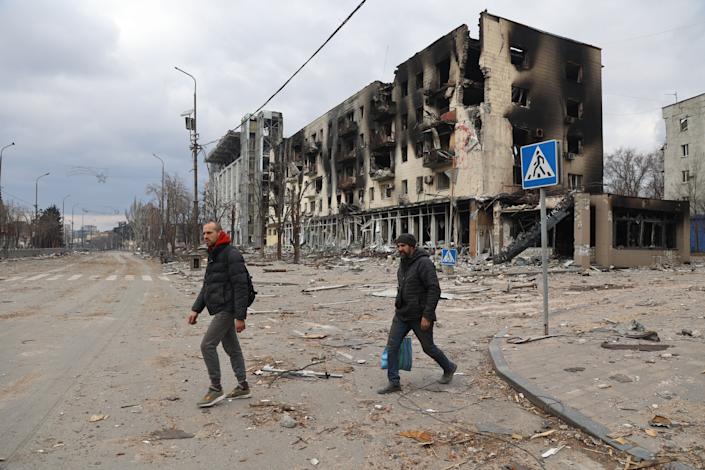 As President Biden announced a new wave of severe financial sanctions against Russia this week for alleged war crimes against Ukraine, new details have emerged of how Russian soldiers have forcibly removed tens of thousands of Ukrainians from occupied areas and sent them to “filtration camps” for intense interrogation before shipping them off to various cities around Russia, according to multiple reports.

The filtration camps, described as large plots of military tents with rows of men in uniforms, are where deported Ukrainians are photographed, fingerprinted, forced to turn over their cellphones, passwords and identity documents, and then questioned by officers for hours before being sent to Russia. A satellite image captured by the U.S.-based Maxar Technologies last week offered the first glimpse of one camp in the Russian-controlled village of Bezimenne, giving a peek into how Russians are processing Ukrainians and attempting to strip them of their identities. Ukrainian officials say more than 40,000 people have been forced into Russia against their will since last month.

Many Ukrainians have shared with the Guardian harrowing accounts of being taken from their homes and dropped off in a foreign Russian community.

“On March 15, Russian troops stormed into our bomb shelter and ordered all the women and children to get out. It was not a choice,” one woman, who requested anonymity for fear of her safety, told the British-based paper. “People need to know the truth, that Ukrainians are being moved to Russia, the country that is occupying us.

“They went through my phone; they asked if I knew anything about the Ukrainian army, if I had friends in the military,” she added. “They also asked me what I thought about Ukraine, about [Russian President Vladimir] Putin and about the conflict. It was very degrading.”

This claim backs up a recent Telegram post from the Mariupol City Council stating that Russian soldiers have kidnapped Ukrainian residents from the besieged port city of Mariupol, according to the English translation of the post.

Dmitry Peskov, the Kremlin spokesperson, has denied these accusations, calling the reports “lies.” He claimed that an excess of 420,000 Ukrainians have voluntarily evacuated into Russia from dangerous conditions in Ukraine.

Ukrainians who have been forced from their homes, however, contradict this assertion. They say Russian forces have transported Ukrainians through Russian-controlled eastern Ukraine in groups of 200 to 300.

Linda Thomas-Greenfield, the U.S. ambassador to the United Nations, suggested on Tuesday at a U.N. Security Council briefing that there are similarities between present-day Russian filtration camps and Nazi Germany concentration camps nearly a century prior.

“Reports indicate that Russian Federal Security agents are confiscating passports and IDs, taking away cellphones, and separating families from one another,” she said. “I do not need to spell out what these so-called filtration camps are reminiscent of. It’s chilling, and we cannot look away.”

The scale and force of Russia’s deportations and widespread assaults on civilians remain unclear — but their impact has reverberated around the world.

“We have all seen the gruesome photos,” Thomas-Greenfield said. “Lifeless bodies lying in the streets, apparently summarily executed, their hands tied behind their backs.” She called the reports of the abduction of children, mayors, doctors, religious leaders and journalists deeply troubling.

This is not the first time Russia has been accused of using filtration camps.

The term originated in Europe after the end of World War II, in the mid- to late 1940s, according to Nick Baron, a professor of history at the University of Nottingham in the U.K. After millions of Soviet citizens gained their freedom from Nazi control, many who were living outside the Soviet Union sought to return but were subjected to holding stations and camps for screening before readmission.

Fifty years later, during the first Chechen war in the mid-1990s and the second Chechen war in the early 2000s, as the small European nation vied for its independence, Russian forces once again used these camps for mass internment, according to NPR.

The Guardian reported at the time several accounts of escapees detailing the horror inside these filtration camps. One Chechen man recalled men and women being raped by Russian guards, inmates being beaten daily with iron bars and others forced to use their close quarters as an open toilet.

Another Chechen survivor said Russian forces were using the filtration camps for “extermination,” citing various accounts describing suffocation, electric shocks to genitalia, faked executions and exposure to frigid temperatures. Russians sought ransom from Chechens, and those who could not pay were tortured, most of them allegedly dying during the ordeal.

Human Rights Watch, an international human rights organization, detailed the brutal abuse and violence in these camps in a February 2020 report.

Thomas de Waal, a reporter who covered the war in the 1990s, told NPR last month that he sees similarities between the reports surfacing today and Russia’s actions then.

“There are some pretty disturbing parallels,” de Waal told the public radio network. “The use of heavy artillery, the indiscriminate attacking of an urban center. They bring back some pretty terrible memories for those of us who covered the Chechnya war of the 1990s.”

Two decades ago, Russia won a victory against Chechnya after those two wars.

Offering some hope, according to the United Nations, the unlawful deportation, transfer or confinement of others constitutes a war crime. But the scope of any potential punishment remains unclear.

The international human rights group Amnesty International listed details in its latest press release of “extrajudicial executions and other unlawful killings,” as an attempt to record alleged Russian war crimes demonstrating the brutality of Russian forces.

“Testimonies show that unarmed civilians in Ukraine are being killed in their homes and streets in acts of unspeakable cruelty and shocking brutality,” Agnès Callamard, the group’s secretary-general, said in the release.

“The intentional killing of civilians is a human rights violation and a war crime. These deaths must be thoroughly investigated, and those responsible must be prosecuted, including up the chain of command.”

Laura Mills, a researcher with the organization, hopes the stories it has personally verified help lead to justice for those involved.

“These are apparent war crimes,” Mills told Yahoo News. “They should be investigated and prosecuted as such.”

Ukrainian officials are hoping resources and increased Russian penalties will help them outlast their larger foe. Biden’s most recent sanctions include banning new investment in Russia, imposing the most severe financial sanctions on Russia’s largest bank and government officials and their family members, who include two of Putin’s daughters.

The U.K. and other European countries have also tightened financial sanctions on Russia. Though they have not thwarted the assault on Ukraine as of yet, the resilience of the much smaller Ukrainian defense shows vulnerability in Russia’s future.

Meanwhile, the appearance of mobile cremation machines has been reported alongside killings of Ukrainian civilians still being carried out by Putin-led troops. According to NBC News, reports of sightings of the machines are “credible” but there is no evidence they have been used. The mayor of Mariupol estimated on Wednesday that more than 5,000 Ukrainian civilians have been killed in that city alone since late February and that the death toll continues to climb.

As of Thursday, more than 4.2 million Ukrainians had fled the country, with the majority — upwards of 2.4 million — finding refuge in Poland, according to the U.N. refugee agency.

“We want policymakers in all countries to take this seriously,” Mills said. “[We want them] to take war crimes seriously.”