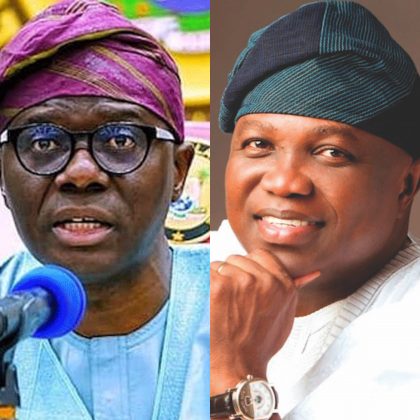 The Lagos State former governor, Akinwunmi Ambode, through his campaign group, Akinwunmi Ambode Campaign Organisation (AMCO), has concluded plans to determine who becomes the All Progressives Congresses (APC) governorship candidate and that which succeeds the incumbent governor, Babajide Sanwo-Olu, during 2023 election in the state.

Aside from the governorship seat, Ambode and his supporters have also indicated that they were prepared to determine APC members that represent Lagos at both Senate and House of Representatives as well as members that would occupy the State’s House of Assembly after next year’s election across Lagos.

The former governor group’s aim is to challenge the current structure in Lagos and take over the mantle of leadership and said that Sanwo-Olu’s endorsement by the Governor’s Advisory Council (GAC) and others did not indicate APC members’ stance since the GAC was not recognised by the party at the national level.

They added that the stance was from GAC and not a total reflection of APC members, just as they described the GAC as a Non-Governmental Organisation (NGO) that was not recognised by the party’s constitution.

The chairman of AMCO and former Commissioner for Energy and Mineral resources, Wale Oluwo, disclosed their plans and stressed that 2022 primaries would be different from that which was conducted in 2018, resulting in Ambode’s removal from office.

During the programme anchored by Reuben Abati, a former presidential spokesperson, on a Lagos-based radio station, Oluwo said Ambode is seriously interested in what happens in Lagos and has indicated readiness to stand by his ideals.

Oluwo disclosed that AMCO would present aspirants that would contest for all elective offices including governorship, and challenge the existing structure within the Lagos APC.

He disclosed that feasibility studies have been conducted and that their outcome showed Lagosians were not getting dividends of democracy under the present administration as against what was obtained during the previous administration in the state.

“Performance for performance, the administration of Sanwo-Olu cannot be compared to what Ambode achieved. You have to start with security and infrastructure, we can show a lot of things now. But for this government, well this is not the time to start tearing ourselves apart.

While disclosing that he had returned to APC after a change in leadership of its National Working Committee (NWC) and the disposition of the national chairman, Abdullahi Adamu, to ideals of internal democracy, Oluwo hinted the major plan was to return power to members as against some individuals determining activities within APC.

According to him, what we have in Lagos APC is that a particular group has monopolized everything without considering others. I am happy to be back and Governor Ambode is interested in what would happen in Lagos during 2023 general election. And that interest aligns with the interest of the people.

“The way that the GAC sponsored its candidate is the same way that we will do that for our own candidate too. And members of the party will have the option of determining which of the candidates, either AMCO or GAC, they will like to vote for. We acknowledge that Sanwo-Olu has picked his nomination form, the AMCO candidate will also do his own. And the primary will happen.

“For AMCO, we are participating at all levels of the election. From Governorship to the House of Assembly. We will field candidates for all positions. Our candidate will not be Akinwunmi Ambode. That is not where we are going. We will present our own aspirant and he would challenge the governor for the seat in Lagos.

“The process of presenting our own candidate is almost concluded and I can assure you that by early next week, that candidate will be announced. The GAC is only promoting their own interest by announcing Sanwo-Olu’s as their candidate”.

A Chieftain of the party in Lagos, who did not want his name in print, said that if one sample opinions of members and residents of Lagos, the revelations may sweep one off his feet.

According to him, the Sanwo-Olu administration has not met the aspirations of Lagosians and I am afraid that the party may be defeated if we field in Sanwo-Olu due to the issues surrounding the administration particularly the shooting at the Lekki tollgate during EndSARS protest.

“Many of us have embarked on steps to measure performances of the incumbent administration. And doing that, we had gone to sample opinions of the people and it was discovered that the administration has not performed as expected”, the chieftain added.

Meanwhile, he has thrown his weight behind the stance of AMCO that no one should be given an automatic ticket, rather they should allow members to decide who to become APC flagbearer for the election.

The party elder added that it would bring fair competition among members that have indicated interest to contest on APC platform and everyone would battle to get the support of the party members, unlike the existing plan.

The chieftain stressed that dozens of members’ ambitions have been truncated due to the current arrangement within the Lagos APC and that it was time that the policy change and the leadership give everyone opportunities to test their strength.

Another member from the Sanwo-Olu’s camp told our correspondent that GAC’s endorsement is important and that it represents the positions of members since the composition of the council includes APC leaders across the state who were close to grassroots members.

He added that the endorsement reflects that Sanwo-Olu’s administration worked more than the Ambode and it is evident across Lagos, especially in the rail projects, and other programmes as well as policies initiated by the current administration.