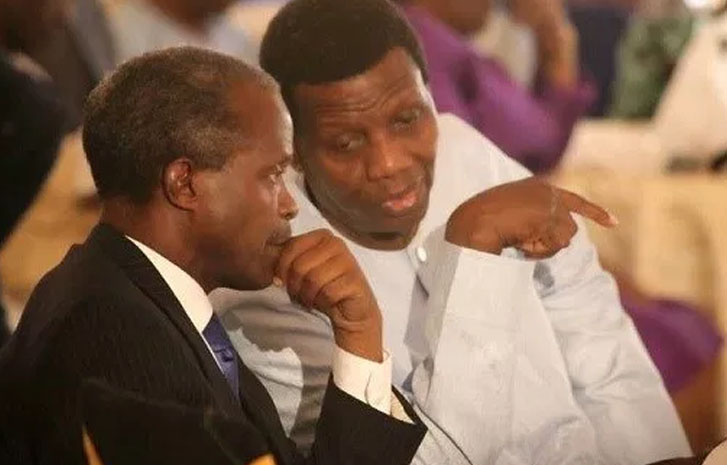 Pastor Timothy Olaniyan, whom a Feb. 28, 2022, Redeemed Christian Church of God (RCCG) memo appointed to lead a newly created “Office of Directorate of Politics and Governance” to “help coordinate the engagement of our people who are willing to be involved in politics as well as mobilize support for them when required,” came out from hiding behind his little finger over the weekend to assert that Yemi Osinbajo is the only Nigerian alive today who can transform Nigeria.

“As of today, Pastor Yemi Osinbajo is not just a pastor; he is still a child of God,” he said.

Olaniyan has let the cat out of the bag, and the church is now trying its damnedest to stuff the cat back in, but it’s too late. (The Vanguard, which first reported the story, was told to delete it, which it shamefully did, but it’s been republished on many other sites).

Recall that when I called out the RCCG memo’s unwarrantedly provocative divisiveness in a March 10, 2022, article titled “RCCG’s Dangerous Foray into Politics for Osinbajo,” hordes of aggressively ignorant, low-IQ RCCG fanatics launched laughably impotent attacks at me and said I’d misinterpreted the memo.

Later, Enoch Adeboye, the head of the RCCG, even protested his political neutrality and appeared to disclaim any responsibility for the memo.

Well, the truth is that Adeboye’s utterances are the rhetorical and ideological fertilizers for the sort of intolerably tyrannizing supremacist bigotry that the RCCG has now come to be associated with.

For example, on June 14, 2015, according to the Nigerian online news site Legit.ng, Adeboye told participants at a program he organized “for leaders and potential leaders at the RCCG national headquarters, Throne of Grace Parish, Ebute-Meta in Lagos” that he prophesied and inspired the emergence of Osinbajo as Vice President. He added that the man would become president someday.

“Several years ago, when the Redeemed Christian Church of God was still very small— and I mean very small—I told them what God said: that presidents will come here to worship. But their amen was very weak,” he said.

He added: “I moved further to say that God says more than that. God said presidents will be members of the church. They will be ushers, but the members then find [sic] it difficult to swallow that but mark my words, whenever God speaks, the Holy Spirit sanctioned it.”

Osinbajo, as I’ve repeatedly pointed out, believes himself to be the manifestation of Adeboye’s prophecy. In a May 3, 2015 Daily Post news story titled “Pastor Adeboye predicted my emergence as vice-president – Osinbajo,” Osinbajo was quoted as telling parishioners at the May National Holy Ghost Service of the RCCG at the Redemption Camp, kilometer 46, Lagos – Ibadan Expressway in Ogun State that he is “part of the fulfilled prophecy made by Pastor Enoch Adeboye that in RCCG, there would be pastors, presidents, vice presidents in the church.”

But here’s where all the superstitious claptrap gets frighteningly supremacist and concerning.

In a December 4, 2019, article published in a Christian online news site called Church Times Nigeria titled “PROPHECY, CONTROL & RELIGIOUS HEGEMONY: RCCG & THE REST OF US,” an author of Christian books and articles by the name of Moses Oludele Idowu disclosed that Adeboye had “prophesied that it would come to a time in the country that the church will be at the centre of every critical decision, adding that nobody will amount to anything without the input of the RCCG.”

Then, during what is called “Declarations” at an RCCG Convention in August 2019, the Christian author said, Adeboye boasted that his prophecy of the past years had already materialized, apparently in reference to Osinbajo’s aggressive RCCGification of everything he can RCCGify in the governmental and cultural spheres in Nigeria.

“Adeboye recalled that his earlier prophecy that no major decision will be taken in the country without the input of the RCCG had already come to pass,” Idowu said. And he is right.

While the rest of the country sleeps in blissful unawareness, the RCCG has created and recreated unending circuits of symbolic, cultural, and political power in Nigeria.

The church already dominates the news media formation. The majority of media CEOs, editors, columnists, etc. in the Southwest are RCCG members. That was why the Vanguard could be prevailed upon to delete a factual story it published that the church thinks is injurious to Osinbajo’s political aspirations.

The entire banking sector has been RCCGified. Most bank CEOs and MDs down to cashiers and even cleaners are RCCG members.

“Which church do you attend?” is now a standard interview question, particularly in Yorubaland, by RCCG members who control the levers of power. Response to that question determines whether or not people get jobs. It has proved to be an effective, symbolically violent bludgeon to forcefully recruit for the church.

University administration in the Southwest has also been RCCGified. It’s now increasingly impossible to be a Vice Chancellor—or even a lecturer—if you’re not an RCCG member, at least in Yorubaland for now.

The NGO sector, likewise, is controlled by RCCG members, and they reproduce and sustain themselves through cult-like, religiously exclusive recruitment strategies.

With the blessing of Adeboye, Osinbajo is now successfully infiltrating traditional institutions in Yorubaland. Wherever an Oba dies and whenever he can, Osinbajo makes sure to manipulate kingmakers and governors to appoint an RCCG pastor, the controversy over the appointment of an RCCG pastor as Soun of Ogbomoso being the latest example.

The final leg in the relay for the total RCCG domination of Nigeria that Adeboye prophesied—and that he said has already materialized obviously with the strategic insertion of RCCG members in sensitive positions in the Buhari regime, particularly in the economy, which Osinbajo controls—is the election of Yemi Osinbajo as president.

Osinbajo, as anyone who has studied him closely should know by now, is a vacuous, simple-minded, cognitively stunted half-wit who literally believes Adeboye’s prophecies, who doesn’t think he has any use for the electorate or delegates at his party convention because Adeboye’s powers are sufficient to make voters and delegates vote for him even against their wishes, and who doesn’t feel any obligation to be just and fair to non-RCCG Nigerians—well, unless he’s shamed into doing so by relentless exposure of his bigotry.

That’s why he says the astonishingly absurd things he says in public without thinking about the consequences of his words.

That was why, for instance, according to the Punch of April 25, 2018, he said in public that the Boko Haram insurgency in the Northeast was Satan’s plot to stop the spread of Christianity to Kanuri people and their neighbors.

“We, as the body of Christ, must not lose focus,” he said. “We are called to bring men and women to salvation: all men and women, even those who kill and persecute us…. There is nobody born or yet to be born that can stop the march of the gospel of Jesus Christ.”

What normal, halfway intelligent public official, not least the second most important person in the country, says that, particularly in a nation that is riven by factiously immobilizing religious fissures?

So, the RCCG memo, as I said from the beginning, was unquestionably written specifically to support Osinbajo’s aspiration to become an RCCG overload in Nigeria who would dispense favors only to people who bow to the supremacy of the RCCG and to its General Overseer, Enoch Adeboye.