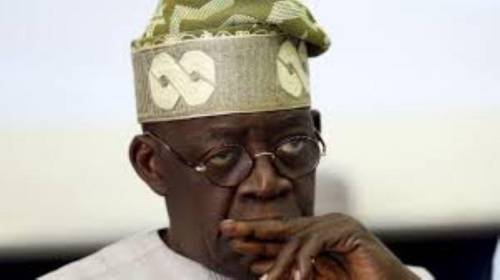 A member of the ruling All Progressives Congress (APC), Sagir Mai Iyali has asked the party’s presidential screening committee to disqualify one of the aspirants, Bola Ahmed Tinubu over alleged certificate forgery.

The petition dated May 17, 2022, was submitted on Monday, May 30, and its receipt was acknowledged by one Emmanuel Akpan.

Tinubu’s academic qualifications have been a subject of controversy for over a decade.

He had indicated he graduated from the University of Chicago in his INEC form 001 filled when he contested the Lagos State governorship poll in 1999.

The former governor also claimed in the affidavit he attached to the INEC form that he lost his university degree certificate while he was in exile between 1994 and 1998.

The Supreme Court in its judgment on May 10, 2002, ruled that Tinubu could not be prosecuted by the police for alleged certificate forgery.

The apex court also ruled that the Inspector-General of Police could not be compelled by Gani to investigate Tinubu for alleged certificate forgery as he enjoyed immunity at the time.

In a petition sent to John Odigie Oyegun, chairman of the presidential screening committee of the APC, Iyali said Tinubu never graduated from the University of Chicago.
He added that the former governor lied about his age and state of origin.

The APC member further asked that the former Lagos governor shouldn’t be allowed to participate in the June 7 primary of the party.

“We understand that Bola Ahmed Tinubu who has since procured his Expression of Interest and Nomination forms and has submitted same to the party has certain issues that clearly amount to a similar disqualification scenario.

“From the information contained in prior submission to the Independent National Electoral Commission (INEC), particularly in 1999, Mr Tinubu Presented a false claim, on oath, of his attendance at University of Chicago from 1972-1976. It is clear now that these claims are false. Not only was this filed in the INEC form with a declaration on oath on December 20th, 1999, but it was also contained in an affidavit of loss sworn to before the High Court of Lagos, Ikeja Registry, December 29th 1998.

“The latter claim that seeks to transpose history is untenable. Mr Tinubu has to show proof he attended University of Chicago or he must stand disqualified as the opposition is in possession of these same documents.

“Similarly, the age of Tinubu is not known to anyone. Though, it’s not contention that he is above the statutory age of 35-years, it’s equally important that his exact age is known,” the petition read.