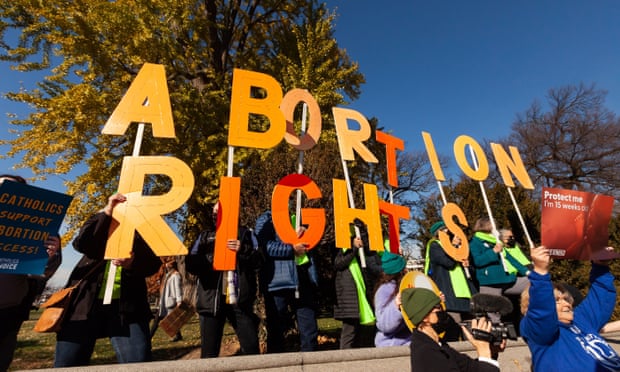 Abortion was already illegal in multiple US states on Saturday, with bans introduced within hours of Roe v Wade being overturned, as cities erupted in protest at the landmark ruling. 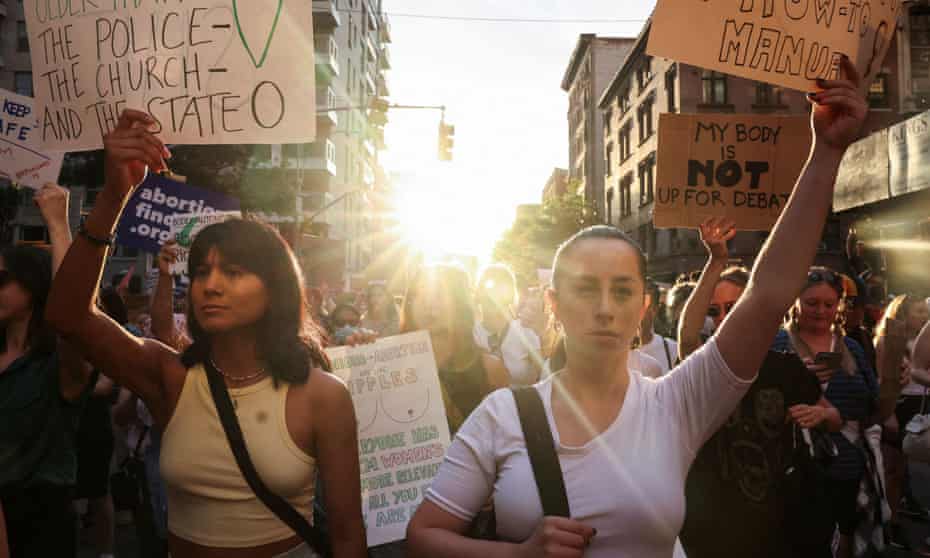 It came after the US supreme court on Friday abolished the constitutional right to abortion, more than 50 years after it was established, leaving individual states to decide. It is ultimately expected to lead to abortion bans in about half of the states.

According to a website affiliated with Planned Parenthood, the US sexual healthcare organisation, it remains legal to travel out of state to get an abortion.

Among the first states to outlaw almost all abortions was Utah where, after the ruling, its abortion ban had already come into effect on Friday night.

Utah’s Republican state senator, Daniel McCay, who sponsored the state’s “trigger law”, said it would be wrong for Utah women to seek abortions in neighbouring states but he had no immediate plans to stop them from doing so.

Ohio’s ban on most abortions at the first detectable foetal heartbeat – known as the “heartbeat bill” – also came into effect. The 2019 law has been on hold for nearly three years, but after the supreme court’s announcement on Friday, a federal judge agreed to remove a federal court injunction blocking it hours later.

Alabama quickly stopped abortions as its 2019 state abortion ban took effect – making it a crime to perform an abortion at any state of pregnancy, including for rape and incest victims. The only exception is for the sake of the mother’s health.

Soon after the announcement, Arkansas’s health department told the state’s two abortion providers that abortions were now banned under a law banning all abortions except to protect the mother’s life in a medical emergency.

What state laws could go into effect?

Facilities were advised that performing an abortion is now a violation of the law, punishable by up to 10 years in prison and a fine of up to $100,000.

West Virginia’s only abortion clinic stopped performing abortions on Friday. The state has a law that criminalises providing abortions, carrying a three to 10 year prison sentence, but it is unclear how it will proceed on enforcement after the supreme court ruling.

READ ALSO:   Breaking: Tension In Lagos as okada riders resist attempts by police to enforce the ban on commercial motorcycles(video)

“Roe has never been enough, but in states like West Virginia, it was the only thing protecting abortion access,” said Katie Quinonez, the executive director of Women’s Health Centre of West Virginia.

Now, she said, people from the state seeking abortions would be forced to travel hundreds, or even thousands, of miles to do so and marginalised communities would be worst affected.

In Missouri, the attorney general, Eric Schmitt, said he was acting immediately to enforce a state law banning abortion except in “cases of medical emergency”. It follows a 2019 law that included a trigger provision bringing it into effect after Roe v Wade was overturned.

In some states, including Arizona and Texas, abortion clinics temporarily stopped providing abortions while they assessed the legality of continuing.

Meanwhile, multiple states vowed to protect the right to abortion. In Washington DC, the mayor, Muriel Bowser, responded by declaring it “a pro-choice city”, but warned that as a district, not a state, it was now vulnerable because Congress had oversight of it.

Advertisement
READ ALSO:   What Is Tinubu Really After? By Tunde Asaju

The Democratic governors of California, Washington and Oregon have all vowed to protect abortion rights and help women who travel to the west coast from other states for abortions.

Anticipating an influx of people seeking abortions, they issued a “multi-state commitment” and said they would collaborate to defend patients and medical professionals providing abortions and pledged to “protect against judicial and local law enforcement cooperation with out-of-state investigations, inquiries, and arrests” into abortions in their states.

In North Carolina, its Democratic governor, Roy Cooper, also vowed to protect abortion rights, despite the legislature being controlled by Republicans. In response to the ruling, he put out a fundraising appeal on Friday for assistance in preventing Republicans from getting veto-proof majorities in the state in November.

In New Mexico, where abortion is readily available, the top public prosecutor and Democratic nominee for attorney general, Raúl Torrez, urged politicians to take more action to protect women’s access to abortions, including for those from other states.