For all the careful choreography of Joe Biden’s Middle East tour, the White House made a major miscalculation when the president finally came face to face with Saudi Arabia’s crown prince, Mohammed bin Salman, for the first time.

Before Air Force One left Washington, the administration said that Biden would be avoiding physical contact and not shaking hands owing to a rise in Covid cases, a move widely believed to allow him to avoid creating an uncomfortable photo op with the powerful heir to the throne. 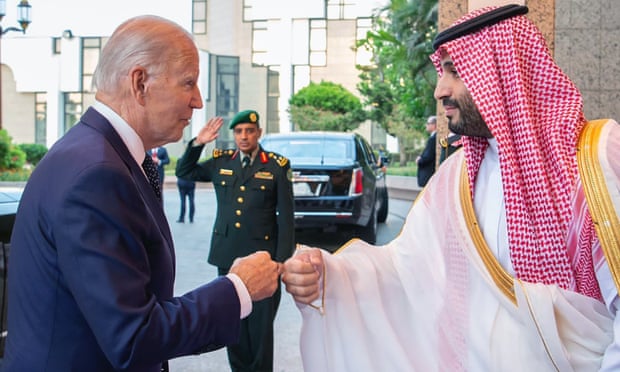 But the image of the two leaders leaning towards each other, hesitant smiles on their faces as they bumped fists, came across as more relaxed and familiar than the US president probably intended.

Biden came to office determined to take a firmer line with the strongmen and autocrats beloved by Donald Trump. He had a particular enmity towards Prince Mohammed, the ambitious 36-year-old who deposed his uncle to become next in line as king, waged a ruinous war in Yemen, and locked up or killed his critics.

On the campaign trail, in the aftermath of the gruesome murder of dissident journalist Jamal Khashoggi, Biden vowed to make Saudi Arabia a “pariah state”. He has since refused to speak to the crown prince directly, liaising instead with his ailing father, King Salman. Shortly after arriving in the White House, Biden released US intelligence findings – suppressed by Trump – which concluded that Prince Mohammed approved the operation targeting the Washington Post journalist at the Saudi consulate in Istanbul.

When the US president brought up Khashoggi with the de facto Saudi ruler on Friday, the prince reportedly hit back, accusing Washington of hypocrisy by not investigating the killing of Palestinian-American journalist Shireen Abu Aqleh, and for allowing the abuse of inmates at Iraq’s Abu Ghraib prison.

Yet Riyadh has been one of Washington’s closest strategic partners for decades for a reason that no US president can ignore. Biden has heard the siren song of the kingdom’s vast oil reserves: the war in Ukraine has unleashed chaos in global oil markets, and he can no longer refuse the call.

The president stopped in Israel and the occupied Palestinian Territories for three days before making his way to Saudi Arabia last week, delighting Israeli leaders with his forthright commitment to the country’s security situation with Iran and disappointing the Palestinians by saying that the “ground is not ripe” for renewing peace talks. In terms of deliverables, he achieved little other than the lifting of a Saudi ban on Israeli flights over the kingdom, and promises of 4G access in the West Bank and Gaza.

The Holy Land pageantry, however, was never the focus of Biden’s tour. “The other parts of the trip were just padding out the real reason Biden came to the Middle East, which is meeting Prince Mohammed,” said Ali Shihabi, a Saudi political analyst.

“That’s the only thing that mattered. And it’s not just oil. Biden has realised belatedly that Saudi Arabia isn’t just reliant on America any more – it has important relationships with China and Russia, too. Those countries sell weapons, and have influence on Iran that the US doesn’t have.

“The fact remains that if you want anything done in the Middle East, you can’t just ignore Saudi Arabia.”

It was never going to be easy to make amends with the notoriously vengeful de facto leader of a kingdom where honour is valued above all else. Despite the misgivings of many Democratic voters, who accuse Biden of shelving a pledge that his foreign policy would be based on human rights, the president has been forced to try.

Brent crude hit a 14-year high of $139.13 a barrel in March, fuelling global inflation and a worldwide cost of living crisis. In the US, inflation is at 9.1% and accelerating, which is likely to translate into lost seats for the Democratic party in November’s midterm elections.

Saudi Arabia is home to the second largest proven oil reserves in the world, and is the producer with the biggest influence on its price, but Biden went home on Saturday without being able to make any major announcements on increasing global oil supply. The most the Saudis would publicly commit to was a promise to pump more oil if there are shortages in the market, although there may be more welcome news for the president at next month’s Organisation of Petroleum Exporting Countries (Opec) summit.

Other than oil, during a Gulf Cooperation Council meeting in Jeddah, Biden was keen to reassure leaders from around the Middle East that Washington will not “walk away” from the region “and leave a vacuum to be filled by China, Russia or Iran”.

But Russia’s invasion of Ukraine has widened emerging cracks in the US relationship with the Gulf monarchies, who no longer view Washington as a reliable bulwark against Tehran; the Middle East’s petrostates have notably refrained from supporting the Biden administration’s attempts to isolate Moscow.

They are also unlikely to heed the president’s departing message that “the future will be won by countries that unleash the full potential of their populations … where citizens can question and criticise leaders without fear of reprisal”.

“This was a symbolic trip, and ultimately it’s a big win for MBS, at the expense of Biden paying a political price,” said Shihabi, using the crown prince’s well-known acronym.

Has it been worth it? It may not seem so at the moment. But the White House has an eye on the longer term; in Jeddah, Biden said he was proud that the “era of land wars in the region, wars that involved huge numbers of American forces, is not under way”.

No US leader will commit to another Afghanistan or Iraq. The president is also lobbying hard for Arab states such as Saudi Arabia yet to normalise relations with Israel to do so, in order to join the emerging regional defence alliance against Iran.

Despite the rhetoric about maintaining “active, principled, American leadership”, the chess pieces of the Middle East are moving, and the US is ready to quit. And while Biden could turn out to be a one-term president, Prince Mohammed may well be shaping the region’s future for many decades to come.