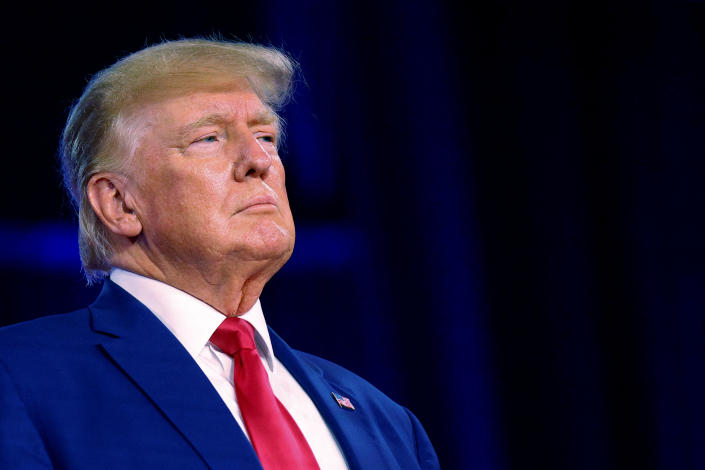 Trump posted or reposted more than 60 messages early Tuesday, hours after he demanded on Truth Social that he be declared “the rightful winner” of the 2020 election, amplifying several memes that portrayed him as a political messiah, attacking President Biden and moderate Republicans and portraying Democrats as greater enemies of the state than Russia.

Among the conspiracy theories Trump reposted Tuesday was one that suggested that it was the FBI and members of antifa who had stormed the Capitol on Jan. 6, 2021, rather than his own supporters, anti-vaccine messaging and assertions that U.S. intelligence agencies do not have the legal authority to conduct an ongoing review of the classified documents Trump stored at his Mar-a-Lago resort in apparent violation of the Presidential Records Act.

Many of the posts Trump has shared have contained QAnon messages and iconography.

The conspiracy memes Trump has promoted are the stock and trade of QAnon and 4chan message boards, a toxic blend of misinformation and calls for violent insurrection against the so-called deep state that Trump and his followers see as the entrenched enemy of democracy in the U.S. In 2020, Facebook and Twitter banned QAnon accounts on their platforms, citing threats of violence.

But those bans have not been easy to enforce. On Monday, Meta, the parent company of Facebook, said it had banned around 480 accounts linked to the extremist group the Proud Boys more than four years after Facebook had attempted to rid its platform of such accounts.

Trump launched Truth Social after being suspended from Facebook for two days prior to the Jan. 6, 2021, riot at the Capitol, and banned from Twitter on Jan. 8, 2021, following prior suspensions due to terms of service violations.

But the platform, which has billed itself as a “free speech haven,” has faced multiple problems since debuting in February. On Tuesday, Google announced that it would continue to ban Truth Social from appearing in its app store due to its lax content moderation standards that failed to police threats of violence by users.

“On Aug. 19, we notified Truth Social of several violations of standard policies in their current app submission and reiterated that having effective systems for moderating user-generated content is a condition of our terms of service for any app to go live on Google Play,” Google said in a statement.

After peaking in March, Truth Social’s stock price has fallen nearly 75%, the Washington Post reported, in part due to Trump’s legal jeopardy stemming from his handling of classified documents after leaving the White House.

And in a further blow, the U.S. Patent and Trademark Office refused an application by the former president’s company last week because the name Truth Social was too similar to those already in use by other businesses.

While the former president and his supporters have often blamed Trump’s precipitous social media decline in followers — from more than 88 million on Twitter prior to his permanent suspension to just 4 million on Truth Social — on a premeditated effort to silence him and curtail free speech, his critics argue that his social media presence helped incite the Jan. 6 riot and remains a threat to public safety. On Aug. 12, Ricky Shiffer, an armed man clad in body armor who regularly posted to Truth Social, attempted to breach an FBI field office in Cincinnati before being killed in a shootout with agents.

In one of his conspiracy-laden posts Tuesday morning, however, Trump included a message that both sides in that debate might agree upon: “Nobody said that to ‘MAKE AMERICA GREAT AGAIN’ was going to be easy!”