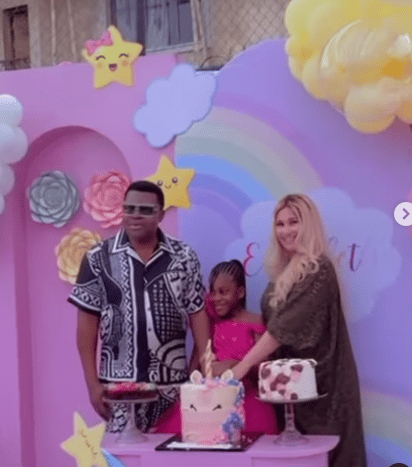 Nollywood actress Caroline Danjuma and her billionaire ex-husband, Musa Danjuma have reunited and partied together for the sake of their daughter, Elizabeth who marked her 8th birthday over the weekend.

CityNews reports that Caroline and Musa Danjuma who parted ways years ago after a messy fight over infidelity, put their indifference aside to take photos, and dance together during the birthday party.

Musa Danjuma’s presence added so much color to the occasion so much so that Caroline Danjuma had to throw him a shout-out on social media.

“Undisputed best dad in the world awards goes to …. Elizabeth’s dad .. the king himself.. we had a blast yesterday ..” Caroline Danjuma bragged.

Recall that earlier this year, Caroline Hutchins (Danjuma) for the first time talked about her divorce from ex husband Musa Danjuma since their split.

Taking to Instagram, the former Nollywood actress shared her experience during the divorce, nothing that her divorce from Mr Danjuma made her feel like a failure.

She revealed that she had held herself responsible for not creating a perfect marriage and blamed herself for mistakes they both made during their marriage.

Carol also noted that after she began to heal, she started to understand that she wasn’t a failure just because her marriage failed.

She wrote, “I blamed myself for not making a perfect marriage, I blamed my self for both faults of ours until I started healing then I knew I was not a failure.”

“I prayed to God for assistance, most importantly to forgive my self and him.”

“Rather than hate the outcome of what was, I chose love and peace of mind for what is. We both ain’t perfect and that is what makes us human. I dealt with the hurtful words from friends and strangers, the stigma and constant mockery without knowledge of what truly happened.”