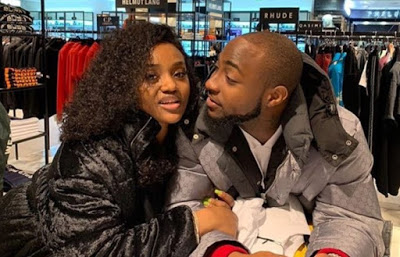 Isreal DMW has shared a loved-up photo of his boss, Davido, and his girlfriend, Chioma Rowland.

This online medium reported days back, that the couple became a trending topic following their reconciliation.

Isreal DMW took to his Instagram page to delight fans with a lovely photo of the most-talked about couple.

Sharing photo of the love birds, Isreal DMW advised Nigerians not to interfere in couple’s matter.

This is coming hours after, socialite and entrepreneur, Pascal Chibuike better known as Cubana Chief Priest rained prayers on them.

The Cubana club owner who has been a proud supporter of the couple, was no doubt overjoyed over their reconciliation.

Cubana prayed for the couple to welcome another child next year.

Mocking Sophia, he bragged that Davido and Chioma’s relationship was ‘sweeting’ some people and “paining” others. There was no doubt that he was referring to Sophia, who isn’t a fan of the couple.