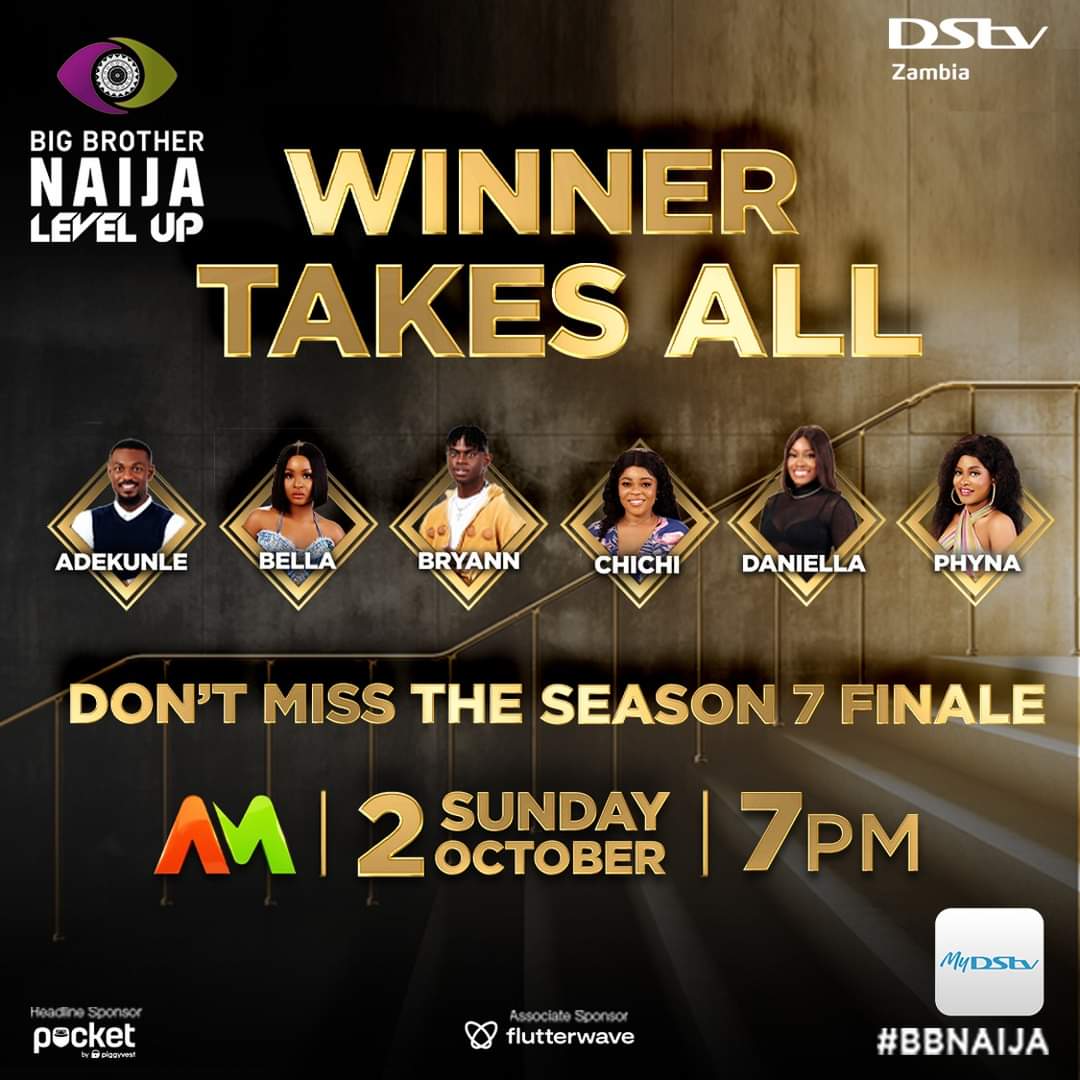 The BBNaija season 7 top 6 finalists are:

07:34: Daniella has been evicted from the Big Brother Naija house.

07:40 : ChiChi has been evicted from the Big Brother Naija level up house.

07;51: Adekunle has been evicted from the Big Brother Naija level up house.

Bella has been evicted from the Big Brother Naija house.

This online news platform understands that as the winner of the Big Brother Naija Level Up Season 7, Phyna walked away with N100 million worth of prices.

The Level 2 housemate beat 28 housemates to emerge winner of the Level Up season.

Phyna, who is born Ijeoma Josephina Otabor, has been declared the winner of the Season 7 of the Big Brother Naija show with the theme, ‘Level Up,’ leaving Bryan as the first runner up.

At the grand finale today, Sunday, October 2nd, the evicted housemates were Daniella, Chichi, Adekunle, and Bella, with Phyna and Bryann as the top two housemates battling for the N100m grand prize.

The 25-year-old contestant who is one of the fans’ favourites was born in June, 1997 and hails from Edo State.

During the show, Phyna mentioned in several instances that she had it rough growing up. She came from a family where everyone had to hustle on their own and as such, she grew up independent, doing several jobs.

The TV star also mentioned that part of her hustle included being a self-acclaimed high priestess.

Phyna walks home with the brand prize of 100million, 50million in cash and 50million as prizes from sponsors and a car.

Before her victory, Phyna broke record as the first female housemate to get verified.

The reality star, who is the most talked-about housemate this season beat her co-housemates to become verified.

This news was no doubt a big one for Phyna’s fans, who had been dejected over her failure to win tasks.

Taking to social media, they expressed their excitement at her newest feat.

Kemi Filani news recalls that the internet went wild when a search engine declared Phyna the winner of the reality show.

The reality star’s name showed up on Google search as the winner of the reality show.

According to the site, Phyna would be given the grand prize of this year’s reality show.

Shockingly, the site used the pronoun, “he” to refer to the female reality star.

Reacting to the Google’s reports, many made fun of it.