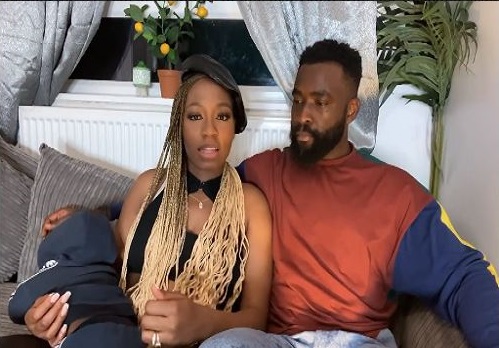 Reality TV Stars and former Big Brother Housemates, Khafi Kareem and Gedoni Ekpata have revealed that they are expecting their second child.

The former British Metropolitan Police officer could be seen in a video that surfaced online donned in an Orange outfit while she revealed her baby bump.

The couple who met in the reality show, Big Brother Nigeria (BBNaija) and got married afterwards gave birth to their first baby together, a boy, in August of 2021 are expecting their second child together.

Taking to her social media account, the UK-based Nigerian star acknowledged that her spouse, Gedoni Ekpata, a fellow reality star, had been missing in action (MIA) for over nine months and she revealed the purpose of their decision was to focus on the family. In the same post, Khafi revealed that they are expecting another child.

Fans are genuinely glad for the BBNaija season four love birds and have trooped to the comment section to congratulate them.