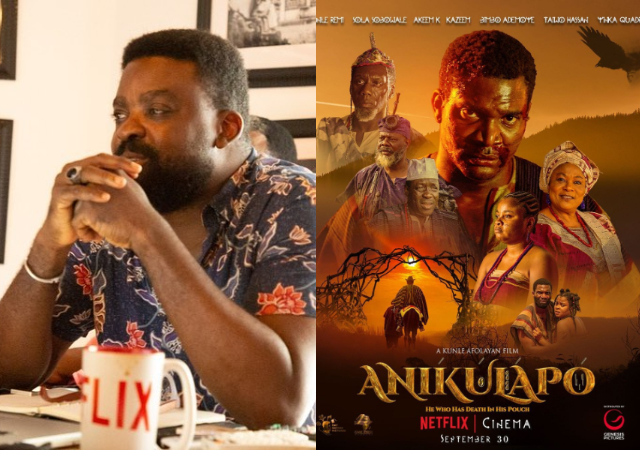 The Nigerian Official Selection Committee (NOSC) for the Academy of Motion Pictures, Arts and Sciences has reacted to the criticisms generated from the rejection of Kunle Afolayan’s Movie ‘Anikulapo’ for the 2023 Oscars.

CityNews earlier reported that Kunle Afolayan on Monday expressed sadness after his latest movie ‘Anikulapo’ was rejected by the Oscars.

The veteran filmmaker who announced the latest development on Twitter noted that he would keep up with the good works amidst the rejection of his movie by the Nigeria Oscar selection committee.

Anikulapo Is Not The Only Movie Rejected

The Nigeria Oscar Selection Committee led by Chineze Anyaene-Abonyi, responsible for submitting a Nigerian film in the International Feature Film (IFF) category of the Oscars, has disclosed that ‘Anikulapo’ was not the only movie rejected.

The source who spoke with Qed said the late Biyi Bandele’s Eleshin Oba: The King’s Horseman, Kunle Afolayan’s ‘Anikulapo’ and Femi Adebayo’s ‘King of Thieves’ were the three Yoruba Language films that were rejected.

The committee revealed that the decision by NOSC to add “No Film is Eligible” as a voting category cost Nigeria the opportunity of having a film submitted for consideration for Oscar.

According to the publication, some members of NOSC also confessed they cannot determine a film that will win an Oscar but is responsible for the submission of movies that meets the criteria.

The source said: “While Eleshin Oba got five votes, Anikulapo and King of Thieves got one vote each.

“Eight members of the 15-member committee however voted for “No Film is Eligible”, a strange category that ensured none of the films makes it to the Oscars.

“The committee’s job is not to determine the film that will win an Oscar but to submit one that meets the criteria.

“Getting a title mention alongside other countries that have films submitted for the Oscars – even if we do not win – would have been good for the Nigerian film industry.”

Subsequently, findings by Ripples Nigeria revealed that ‘Anikulapo’ contravened the Oscars release policy, which states that a movie hoping to be considered for the Oscars’ International Feature Film Award must be released at the Cinema/theatre first, before showing on streamers like Netflix and Television Stations.

Unfortunately, ANIKULAPO was released on Netflix and at the cinema on the same day, September 30.