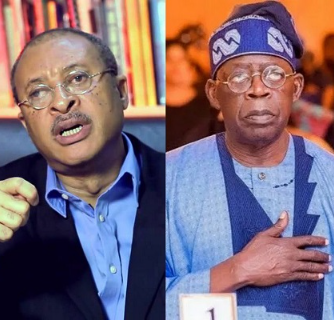 A former Commissioner for Information in Edo state, Prince Kassim Afegbua has dared political economist and a chieftain of the Labour Party, Prof. Pat Utomi to present his medical records for Nigerians to see in order to ascertain his true state of health.

Utomi in a recent interview had challenged Asiwaju Bola Tinubu, the presidential candidate of the All Progressives Congress (APC), to go for a medical checkup and make the result public.He alleged that the former Lagos State governor was unfit to compete for Nigeria’s presidency in 2023.

However, speaking with DAILY INDEPENDENT, Afegbua urged Utomi and other Nigerians to desist from playing the role of personal physicians to well- placed people. He added that Tinubu who went to London to rest ahead of the presidential campaign will soon return to Nigeria bubbling with life.

He said “People are fond of raising dust where there is none in terms of always trying to assume the role of Bola Ahmed Tinubu’s personal physician. Even me as young as I am, i have my health issues. The fact that I can walk around does not mean that I’m wholesome. But if I don’t disclose what is wrong with me, people won’t know”.

“The Tinubu that I have come to know and I’ve had the privilege of interacting with him very closely more than seven times in the last three months is one whose capacity for burning man hours almost unheard of. He starts his day at 11am everyday. When i went to see him at 3am, I met more than 15 people waiting to see him”.

“So, if such a man decides to come to London to rest and prepare for the presidential campaign, why then should anyone just conclude that it is all about ill health? If the man is in Nigeria, they won’t allow him a breathing space as people will throng his residence to see him”.

“I’m sure his advisers must have told him to take one or two weeks break and put himself in good shape for the election. The man is not in the hospital, I can tell you that”.

Advertisement
READ ALSO:   Just In: See Why America Places Nigeria On Its Blacklist

“That was what they said before the primaries that the man is having health challenges and will pull out. However he went around the whole country canvassing for votes from delegates. He was the only aspirant that went round the country while others were waiting for endorsements”.

“Nigerians should stop playing the role of personal physicians to well placed people. All those who are making noise about his health today, if you ask them to display their medical records in public, a lot of them will run away”.

Also speaking on the Peace Accord which Tinubu did not attend, Afegbua said “On the issue of the Peace Pact or Accord, it is not about the presidential candidates but the party. The APC which is the vehicle the flagbearer will use was represented by the National chairman of the party, Abdullahi Adamu. The Vice-Presidential candidate of the party was also there. That settles it”.