The suspect in California Sikh Family’s Fatal Kidnapping, Jesus Salgado has been arrested.

CityNews reports that the 48-year-old man, Jesus Salgado, suspected of kidnapping a Sikh family, including an eight-month-old baby, remains in the hospital in critical condition after he tried to kill himself. The suspect allegedly kidnapped the family of four, the eight-month-old baby, Aroohi Dheri; the mother, Jasleen Kaur, 27; father Jasdeep Singh, 36; and uncle Amandeep Singh, 39, at gunpoint on October 3. However, the family was found dead on October 5.

According to AP, the Merced County Sheriff’s Office said in a statement that investigators identified the alleged culprit after he used a victims’ ATM card in Atwater, about 9 miles from north of Merced. Detectives, who found a surveillance photo from the ATM, said “the person is similar in appearance to the surveillance photo from the original kidnapping scene.” The sheriff’s office also released two still images of a possible suspect seen in surveillance video, and asked for the public’s help in identifying him. Following which, they received a tip identifying Salgado, who attempted to take his life before police arrived. He was arrested later. 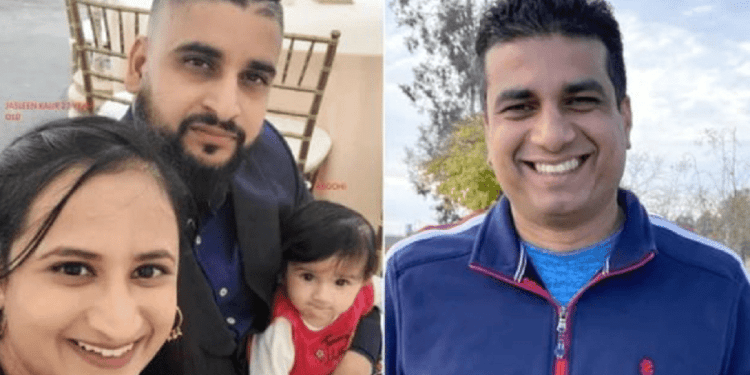 Authorities at a news conference on October 5 showed the surveillance video of a man kidnapping the family. It shows how the suspect went towards the property, located in the 800 block of South Highway 59 in Merced, before talking to one of the men. Later, the video spots the suspect leading the men, who had their hands zip-tied behind their b acks, into Amandeep Singh’s truck. After that, the suspect can be seen going back and gets Jasdeep Singh, who was carrying her baby, into the truck before driving away, reports Yahoo!

Merced County Sheriff Vern Warnke in a video published on Facebook said the kidnapper made no ransom demands or contact of any kind after kidnapping the family, originally from Harsi Pind in Hoshiarpur, India’s Punjab state. Warnke said he believes the motive may have been financial, adding that there is no evidence to suggest the incident may have been a hate crime. He also stated that Salgado may not have acted alone. “I fully believe there was at least one other person involved but we don’t have any evidence to support that, just the circumstances surrounding this,” he said. The sheriff’s office said the FBI, the California Department of Justice, and other local law enforcement agencies are helping with the investigation.

Prior to the news of the family’s death, Sukhdeep Singh, a brother of the victims, “Please help us out, come forward, so my family comes home safe,” while Jaspreet Kaur, wife of Amandeep, said, “My husband is very peaceful and calm person. We don’t have any clue why they kidnapped them.” Following this, relatives of Salgado reached out to the officials and informed that the suspect admitted to them that he was involved with the kidnapping, reports WJMJ.

Salgado was sentenced to 11 years in another case

According to ABC, Salgado was previously convicted of first-degree robbery with the use of a firearm in Merced County, as well as attempted false imprisonment and an attempt to prevent or dissuade a victim or witness. He was given a 11-year imprisonment in state prison in that case, according to the California Department of Corrections and Rehabilitation. However, he got released in 2015 and was discharged from parole three years later. In addition to this, he also has a conviction for possession of a controlled substance.