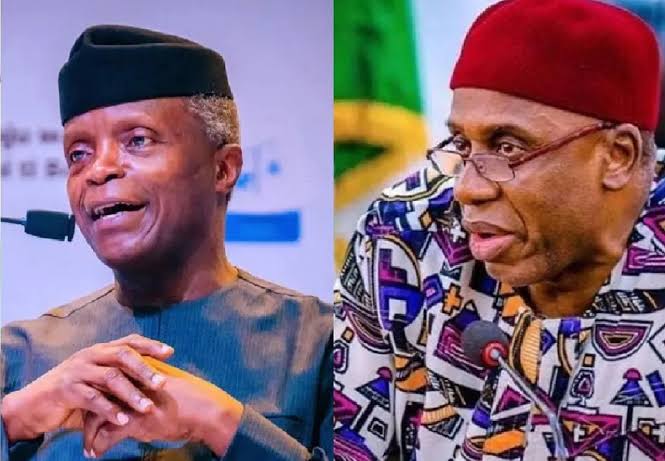 VP Osinbajo, Amaechi, Ganduje and other prominent chieftains of the All Progressives Congress (APC) were absent at the unveiling of the Presidential Campaign Council (PCC) of the ruling party on Friday.

CityNews Nigeria had earlier reported that the ruling party inaugurated its presidential campaign council after so much waiting on Friday.

The Vice President, Yemi Osinbajo, the Governor of Kano State, Abdullahi Ganduje and the former Minister of Transportation, Rotimi Amaechi were absent from the event.

The former Ministry of Science and Technology, Ogbonnaya Onu.

Those present include the Senate President, Ahmed Lawan, Speaker of the House of Representatives, Femi Gbajabiamila. Others include the Director-General of the PCC and Plateau State governor, Mr Simon Lalong, Chairman of the Progressives Governors Forum and Kebbi State governor, Atiku Bagudu, his Kaduna State counterpart, Nasir El-Rufai.

Also in attendance was the former National Chairman of the party, Bisi Akande and a former Senate President, Ken Nnamani, among others.

The National Chairman of the APC, Senator Adamu Abdullahi led other members of the National Working Committee as well as other relevant organs of the party to the event.

Sources close to the presidential candidate of APC, Bola Tinubu that spoke with the Telegraph said efforts are being made to ensure that aggrieved members of the party are brought on board.

The source said, “We are aware of some discontent within the party over the emergence of Asiwaju as the candidate of the party and we are not resting on our laurels on this. We are indeed working on it. We have secured the needed assurances from Governor El-Rufai to help in this regard.”

A source close to the Vice President said Osinbajo was absent because of the directive of President Muhammadu Buhari that asked him not to be part of the PCC.