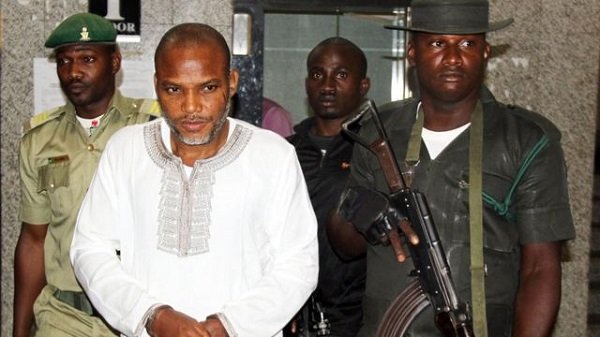 A family member of the leader of the Indigenous People of Biafra, IPOB, Nnamdi Kanu, has accused the Department of State Services, DSS, of detaining the Biafra agitator in a “torture chamber.”

Kanunta Kanu, one of the brothers of the agitator, said Kanu had not been released despite court orders.

He was reacting to the Federal High Court in Umuahia’s ruling that Kanu is returned to Kenya.

The court ruled that Kanu’s extraordinary rendition was against his fundamental rights.

It ordered that the IPOB leader should be restored to the state he was in before the Kenyan arrest and extraordinary rendition last year.

Recall that Kanu was arrested in Kenya and repatriated to Nigeria last year.

The Nigerian Government was accused of subjecting the IPOB leader to extraordinary rendition last year.

Upon his return to Nigeria, Kanu was locked up by the Department of State Services, DSS, while subjecting him to legal tussles.

To this end, Kanu’s Special Counsel, Aloy Ejimakor, instituted a legal action against the Nigerian Government.

On Wednesday, the court granted all the seven prayers sought by Ejimakor.

Reacting, Kanunta tweeted: “Some people are having the notion that #MaziNnamdiKanu has been released from detention the answer is NO, he is still in DSS “torture chamber”.