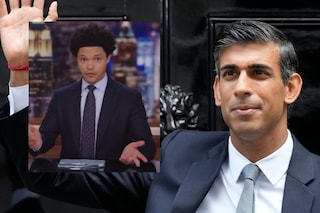 The row began with a single call to a UK radio station, was stoked by one of America’s best-known comedians and ended with former cabinet ministers wading in – and Downing Street, too.

At the heart of the furore: a claim that Rishi Sunak had experienced a racist “backlash” after becoming the UK’s first British-Asian prime minister.

For many, how something across the Atlantic created such a kickback in Westminster is an example of the dangers of drawing direct cultural and political parallels between two differing nations – and the power of Twitter.

“There has been no racist backlash against Sunak from anybody with any public standing in Britain,” Sunder Katwala, director of British Future, a thinktank focusing on identity and integration, immigration and opportunity, told the Guardian.

“This shows more solid anti-prejudice norms in our media and politics than in the US.”

He was reacting to a segment by Trevor Noah on the US satirical news show, the Daily Show, in which he alleged that Britons were concerned that “Indians are going to take over Great Britain”.

His polemic was inspired by a telephone caller on LBC radio who said Sunak was “not even British” and “doesn’t love England like Boris does”.

The caller, who claimed to be a Tory party member, added: “Could you imagine me becoming the prime minister of Pakistan or Saudi Arabia? No. These things matter. We’re talking about England – 85% of English people are white.”

READ ALSO:   I won’t pay ransom even if my son is kidnapped - El-Rufai Insists

“Watching the story of Rishi Sunak becoming England’s first prime minister of colour, of Indian descent, of all these things and then seeing the backlash, is one of the more telling things about how people view the role that they or their people have played in history,” Noah said in his response.

“You hear a lot of the people saying ‘Oh, they’re taking over, now the Indians are going to take over Great Britain and what’s next?’ And I always find myself going: ‘So what? What are you afraid of?’”

The comedian compared the caller to Tucker Carlson, the rightwing Fox News presenter, which led to accusations that he was “projecting” American views on race on to Britain.

Former cabinet minister Sajid Javid, who was Britain’s first non-white chancellor and home secretary, said Noah was “simply wrong” and called his monologue “a narrative catered to his audience, at a cost of being completely detached from reality”.

Britain, Javid insisted, was “the most successful multiracial democracy on Earth and proud of this historic achievement”.

Asked whether Sunak believes Britain is a racist country, a Downing Street spokesperson said: “No he doesn’t.”

It is hard to deny the LBC caller’s racism, Katwala explained, but the strength of feeling boils down to a simple belief – that while there is a “toxic rejectionist fringe with an excessive share of online voice” who might be more inclined to contact radio shows, their bigotry should not be held as representative of what Britons think.

“It’s important to understand the differences between the US and the UK,” he said.

“It’s an important problem for America, that in the Trump era people like Steve Bannon managed to dissolve the boundary between extreme politics and the Republican mainstream.

“You have Republican candidates having to be ambivalent about racism or prejudice, violent protests, false conspiracy claims.”

In the UK, he said, even the likes of Nigel Farage are still “aware of where that boundary is”.

Tom Holland, historian and author, added that the “inability of American liberals to understand the world beyond the US in anything but American terms is a thing of wonder. The likelihood of the rightwing party in the US choosing a Hindu as its leader is, I would agree, effectively zero.”

Plenty of people agreed with Noah, however. Dr Shola Mos-Shogbamimu, a British-Nigerian activist and author, said the presenter was “spot on”.

“There was and is backlash at Rishi Sunak’s appointment as Britain’s first Asian prime minister,” she wrote. “Don’t mind the liars denying it with their gaslighting. It’s what some Brits do best. They are so bold with their Caucacity. Keep speaking truth.”

Advertisement
READ ALSO:   How Nigerian banks are raking in billions from foreign operations

Though Sunak’s appointment as PM was a historic moment for the UK, it drew a dividing line between those who celebrated the ascent of a Hindu politician and those who emphasised his policies would only deliver “more violence” for ethnic minorities. And though racism in the UK might not always be overt, critics said, there are plenty of examples of a more insidious form of oppression.

“It’s not as if representation doesn’t matter at all, but only measuring success on these terms is incredibly narrow,” Maya Goodfellow, author of Hostile Environment: How Immigrants Became Scapegoats, told the Guardian.

“It ignores racial disparities in Covid deaths, higher rates of poverty among certain racial groups or the Windrush scandal, which was just four years ago.

“The fixation on trickle-down equality obscures a thoroughgoing discussion about the way racism and, crucially, racial inequalities, change shape but continue to run deep in Britain.”