Joe Biden rallied with fellow Democrats on Monday night, delivering a message of optimism and determination in the face of widespread concerns about his party’s showing in Tuesday’s midterm elections.

Addressing a boisterous crowd in Maryland, Biden stressed the high stakes of the races that will determine control of the US Congress for the next two years. Painting a grim picture of a Republican-controlled Congress, Biden predicted that the opposing party would use their majorities to roll back Americans’ rights and dismantle social welfare programs.

“Our lifetimes are going to be shaped by what happens the next year to three years,” Biden said. “It’s going to shape what the next couple decades look like.”

Biden repeated his promise to shore up abortion rights if Democrats expand their congressional majorities, but recent polls suggest Americans are currently more focused on economic issues, where Republicans traditionally hold an advantage with voters. In the final days of campaigning, some Democrats have expressed alarm that their candidates have not done enough to address anxiety over the state of the economy, leaving the party vulnerable to a red wave on Tuesday.

In the face of near record-high inflation and fears of a potential recession, Biden instead pointed to different metrics – namely the low unemployment rate and the 10m jobs created since he took office – to defend his administration’s economic agenda. Noting that Donald Trump was the first president who oversaw a reduction in jobs since Herbert Hoover, Biden argued Republicans have no plan to improve the economy. 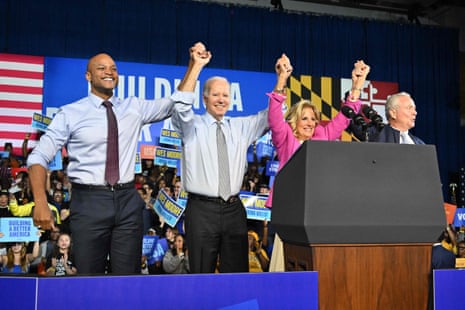 “Remember, these are the guys who passed the $2tn tax cut benefitting the wealthy and big corporations and didn’t pay for a penny of it,” Biden said, referring to the 2017 Tax Cuts and Jobs Act that Trump signed into law. “We’re the ones bringing down the deficit, allowing us to afford to provide ordinary, hardworking Americans a little break.”

Republicans resoundingly rejected Biden’s closing argument to midterm voters, accusing Democrats of neglecting Americans’ most pressing concerns at a precipitous time for the US economy.

“Our country deserves leaders who take accountability and understand the issues facing hardworking families – Joe Biden and Democrats have only shown they are out-of-touch and put power over people,” said Ronna McDaniel, chair of the Republican National Committee.

Several Democratic candidates who will stand for office on Tuesday appeared alongside Biden at Bowie State University, a historically Black school located just outside of Washington. Biden was introduced by Wes Moore, who will become the first Black governor of Maryland if he wins on Tuesday. Given Moore’s impressive polling lead, he appears poised to flip the Maryland governorship to Democratic control after eight years of Republican Larry Hogan’s leadership.

Even with those encouraging signs, Moore emphasized that he is taking nothing for granted in the final hours before polls close.

“The only poll that matters is election day,” Moore said. “And until those polls close tomorrow night, we are running like we are 10 points behind.”

Democrats fear that Moore’s success will prove to be the exception rather than the rule for the party’s candidates on Tuesday night. According to FiveThirtyEight, Republicans have recently regained their advantage on the generic congressional ballot – a summary of polls asking respondents which party they’d prefer to control Congress – elevating GOP hopes of taking control of the House. Republican candidates have similarly gained ground in some key Senate races, raising the possibility that Democrats could lose their majorities in both chambers on Tuesday.

If Republicans can regain control of the House and the Senate, their success would quash any hope of Democrats enacting more of their legislative priorities for the next two years. House Republicans have also promised they would use their majority power to launch investigations of the Biden administration and bring a swift end to the work of the select committee investigating the January 6 insurrection.

Addressing supporters on Monday night, Biden warned that Republican control of Congress could have far-reaching consequences on the country’s governing institutions. Hundreds of Republican candidates running for office this year have expressed baseless doubts about the legitimacy of Biden’s 2020 victory, and the president argued that empowering such election deniers could threaten the foundations of American democracy.

“There’s only two outcomes in their view of an election. One, either they win, or they were cheated,” Biden said. “You can’t only love your country when you win.”

Even as Biden expressed grave concern about the threats facing America, he closed his final speech before election day on a hopeful note, indicating confidence that democratic principles would guide voters on Tuesday and help Democrats secure victories up and down the ballot.

“As I travel this country and the world, I see [a] great nation because I know we’re a good people,” Biden said. “We just have to remember who in the hell we are.”