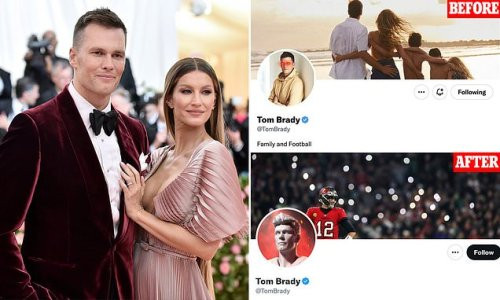 NFL star, Tom Brady has removed his ex-wife, their two children, and his oldest son from his Twitter header following their public divorce.

The Tampa Bay Buccaneers took out his now-ex-wife, Gisele Bundchen, out of his Twitter header, removing a beach picture of the former couple and their children, Benjamin and Vivian Lake, along with his older son, Jack.

The Super Bowl-winning quarterback now has a photo of himself from a Bucs game.

The pair confirmed their split on October 28 after weeks of speculation and 13 years of marriage.

An insider later rubbished the rumored romance with the Brazilian jiu-jitsu instructor, saying that they are just friends.

The source close to Gisele furiously denied that they’re in a relationship, insisting that the date was anything but romantic – and noting that Joaquim is nothing more than a close family friend who has served as her kids’ jiu-jitsu instructor ‘for years.’