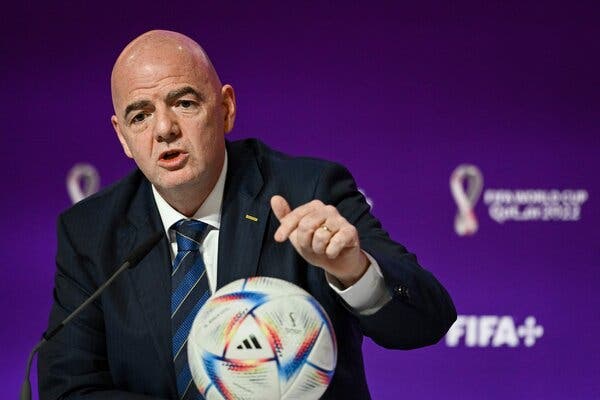 Fifa president Gianni Infantino has accused the West of “hypocrisy” in its reporting about Qatar’s human rights record, on the eve of the World Cup.

In an extraordinary monologue at a news conference in Doha, Infantino spoke for nearly an hour and made a passionate defence of Qatar and the tournament.

The event has been overshadowed by issues in Qatar including deaths of migrant workers and treatment of LGBT people.

Infantino, who was born in Switzerland, said European nations should apologise for acts committed in their own histories, rather than focussing on migrant workers’ issues in Qatar.

He opened by saying: “Today I have strong feelings. Today I feel Qatari, I feel Arab, I feel African, I feel gay, I feel disabled, I feel a migrant worker.”

Hosts Qatar kick off the tournament against Ecuador at Al Bayt Stadium on Sunday (16:00 GMT).

In February 2021, the Guardian said 6,500 migrant workers from India, Pakistan, Nepal, Bangladesh and Sri Lanka had died in Qatar since its successful World Cup bid.

The number is based on figures provided by the countries’ embassies in Qatar.

However, the Qatar government said the total was misleading, because not all the deaths recorded were of people working on World Cup-related projects.

The government said its accident records showed there were 37 deaths among labourers at World Cup stadium construction sites between 2014 and 2020, only three of which were “work-related”.

However, the International Labour Organisation (ILO) said that was an underestimate.

Infantino said: “We have been taught many lessons from Europeans and the Western world. I am European. For what we have been doing for 3,000 years around the world, we should be apologising for the next 3,000 years before giving moral lessons.

“If Europe really care about the destiny of these people, they can create legal channels – like Qatar did – where a number of these workers can come to Europe to work. Give them some future, some hope.

“I have difficulties understanding the criticism. We have to invest in helping these people, in education and to give them a better future and more hope. We should all educate ourselves. Many things are not perfect but reform and change takes time.

“This one-sided moral lesson is just hypocrisy. I wonder why no-one recognises the progress made here since 2016.

“It is not easy to take the critics of a decision that was made 12 years ago. Qatar is ready. It will be the best World Cup ever.

“I don’t have to defend Qatar, they can defend themselves. I defend football. Qatar has made progress and I feel many other things as well.

“Of course I am not Qatari, Arab, African, gay, disabled or a migrant worker. But I feel like them because I know what it means to be discriminated and bullied as a foreigner in a foreign country.

Speaking later on Saturday, England defender Eric Dier said: “The World Cup was awarded to Qatar in 2010 and I was 16 at the time. We as players have no decision on where we play. Those decisions are made above us.

“It’s a difficult situation for us. Every team and player will face it through the tournament. It’s disappointing.”

Qatar boss Felix Sanchez said: “A lot has been said about this, some misinformation and some of the comments were not completely fair. The loss of human life during working hours is the greatest tragedy, whether here in Qatar or anywhere in the world.

“Let’s hope at this World Cup we can all together work to benefit the conditions for these groups, not just in Qatar but everywhere in the world.”

Qatar has been under pressure to build a migrant workers’ centre and Infantino announced a “dedicated and permanent office” in Doha, following discussions with the government and the ILO.

He also said every worker that had an accident “receives compensation by law”.

“Depending on the magnitude, it can be several years of salary,” he added.

Infantino also said Fifa’s Qatar 2022 legacy fund will go into education, signing an agreement that will help 25 million children and women in India.

Just two days before the start of the tournament, Fifa changed its policy and announced no alcohol would be served to fans at any of the eight World Cup stadiums.

It was set to be served “in select areas within stadiums”, despite its sale being strictly controlled in the Muslim country.

Those in corporate areas of stadiums will still be able to purchase alcohol.

Addressing the decision, Infantino said: “If this is the biggest issue we have for the World Cup then I will resign immediately and go to the beach to relax.

“Let me first assure you that every decision taken at this World Cup is a joint decision between Qatar and Fifa.

“There will be many fan zones where you can buy alcohol in Qatar and fans can simultaneously drink alcohol. I think if for three hours a day you cannot drink a beer, you will survive.

“Especially because the same rules apply in France, Spain, Portugal and Scotland. Here it has become a big thing because it is a Muslim country? I don’t know why. We tried and that is why I give you the late change of policy. We tried to see if it was possible.”

Analysis – A quite extraordinary moment

Qatar was named as World Cup host in 2010, and there have been questions and criticism since.

Just when you thought this most talked-about World Cup was about to kick off, Infantino launched into an incredible pre-planned monologue that stunned the room into silence.

The 400 journalists and camera crew assembled in the news conference auditorium initially looked around aghast before jaws hit the floor as Infantino unleashed a 54-minute speech that pulled no punches on media coverage of migrant workers, the LGBT community and the last-minute U-turn on alcohol consumption.

Infantino also took questions from the floor and was asked about the ‘focus on football’ letter sent out to the 32-nations, fans who won’t watch the tournament and England v Iran.

The news conference then took another dramatic turn as Fifa director of media relations Bryan Swanson addressed the room.

“Just because he is not gay, does not mean he does not care. He does. You see the public side and I see the private side. I have thought long and hard about whether I should say this. I do feel strongly about it.

“We care about everyone at Fifa. I have a number of gay colleagues. I am fully aware of the debate and fully respect people’s opinions. When he says we are inclusive. He means it.”

A quite extraordinary day on the eve of a World Cup that shows no signs of letting-up on front-page news stories.