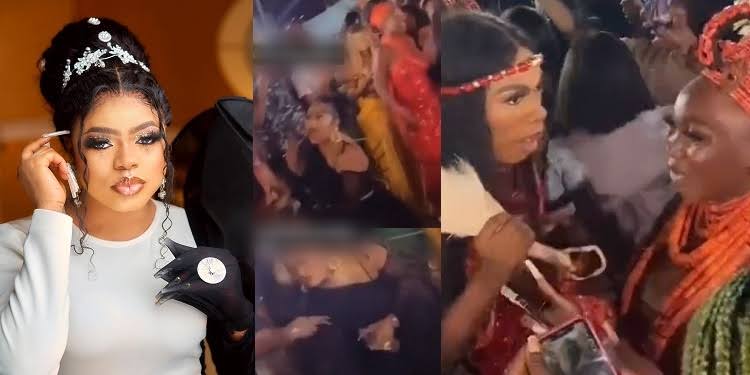 Controversial crossdresser, Okuneye Idris Olanrewaju, popularly known as Bobrisky has spoken on the altercation that occurred between him and Papaya Ex.

CityNews earlier reported that the duo alongside Bob’s junior colleague, James Brown had gotten into a fight at an event.

In the video, Bob seemed quite infuriated as Papaya, James Brown and others danced joyfully behind him.

He proceeded to pick a bottle and threw it in the direction where Papaya and James were.

Sharing a detailed account of the incident, the male barbie said that Papaya, her sister, friends, and her security personnel stormed the event a few moments after he arrived and began putting out some cultural dance moves where he was already seated.

Bobrisky stated that he already nurtured plans to beat up the Instagram influencer as he heard she was coming to the party.

He said that he picked up a bottle of Hennessy but it was taken from him. He then pushed Papaya’s sister before picking a bottle of water to hurl at Papaya.

Fuming and bragging about his might, Bobrisky promised to continue beating Papaya whenever they meet at an event. According to him, her security men won’t even be able to save her from his wrath.

Speaking further, he told bloggers to be ready to report another event as he was preparing to deal with the influencer in an event that would be occurring next week.