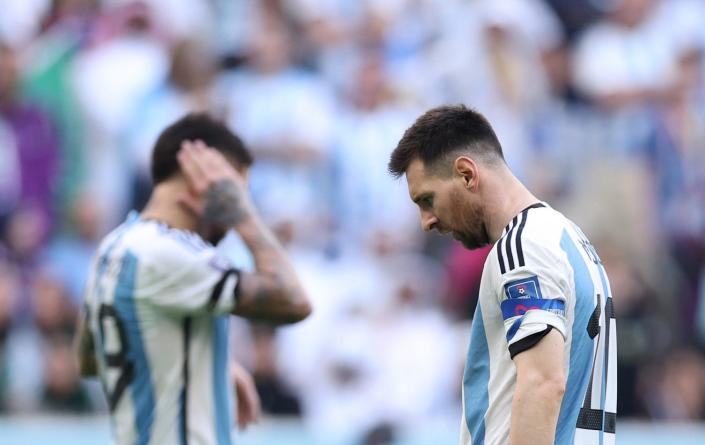 As the final whistle blew, a disbelieving Lionel Messi stood hands on hips in the centre circle as Saudi Arabian’s band of 11 miracle workers collapsed in floods of tears.

Only afterwards did it emerge that the same players in green had been weeping and praying before kick off too – simply at the magnitude of playing against the great Argentina.
How their prayers were answered.

This controversial nation, blighted by an even worse human rights records even than the tournament hosts, need not have bought Newcastle. A much greater feat of sportswashing would be achieved just six hours down the sandy roads from Riyadh.

Salem Al Dawsari, a 31-year-old whose £1m transfer value is dwarfed by Messi’s weekly pay packet, served up the moment that will live through the generations, skipping past his marker to strike a curling second half winner from 18 yards.

Raucous celebrations – kick-starting this surreal tournament into pulsating life – were then secured thanks to a remarkable goalkeeping performance from Mohammed Alowais.

“Praise be to god the merciful,” was his unconventional explanation immediately afterwards. “The stars all aligned,” added the team’s manager Herve Renard. “Completely crazy.”

But divine intervention or not, there are several key elements in this anatomy of Argentina’s astonishing first defeat in 36 matches:

There were more than 88,000 packed inside Lusail Stadium – and up to half of them appeared to have No 10 on their backs. But this tournament – a potential last dance for the world’s greatest footballer – got off to a stumbling slow waltz.

All eyes were on him, but he barely broke out of a stroll in the first half. He had aimed a tame left footed effort at the soon-to-be man-of-match Alowais after a minute, but then opened the scoring after ten minutes in relatively fortunate circumstances.

A harshly awarded penalty allowed Messi to stroke home left-footed, but, aside from a disallowed goal and one probing ball, he was thoroughly underwhelming.

The Saudis making up about a quarter of the crowd delighted in his tepid efforts. A cheer almost as loud as their two goals erupted when he ballooned an effort over.

After the match, Messi – who is on the Saudi payroll – was a miserable sight trudging past the mix zone. One journalist asked “as an ambassador for Saudi Arabia, how important do you think this was?” Needless to say, he didn’t answer.

Argentina losing their shape in a rigid 4-4-2

This team were many favourites for the tournament largely thanks to their new-found physicality. After woeful defending in Russia in 2018, this new line up has muscle to match its flair in attack.

But in a match when the hardest tackles were flying in from their plucky opponents, the system looked too unflexable to adapt. The greatest issue of all was the failure to get the back to Messi in the final third due to their opponents playing such a tightly-packed and disciplined back line.

The Saudis played their hand perfectly as Argentina were caught offside eight times in the first half. “We knew that Saudi Arabia is a team with good players, that they move the ball well and that they push [forward] the [defensive] line a lot,” the captain said afterwards.

“We worked on it, but we rushed a bit. We have to go back to the base of who we are. We have to think about what’s next.”

End of the Qatari-Saudi feud

The 30,000 Saudis in the crowd were outumbered by Argentinians, who almost always travel in the biggest numbers than any other nation.

But this felt like a raucous home fixture thank to the ear-piercing din from behind the goal for most of the match. Those that travelled across the border – including the Crown prince Mohammed bin Salman – were able to do so thanks to a resolution in January last year to end the nastiest of neighbourly spats between the pair.

Football is huge in Saudi, as illustrated by the country’s long pursuit of Newcastle. Bin Salman sees the sport as a key part of his diversification plan to move the country away from dwindling oil stocks.

The enthusiasm shown by the Saudis, many in traditional robes, from the first whistle here was in dramatic contrast with a largely tepid atmosphere for Qatar’s opening match against Ecuador.

Renard, the nation’s French coach, said the home-like atmosphere had been critical. “We need more, more, more to come over for the next games,” he added.

The heavy weight of history

In one way this was a match when Messi finally emulated Maradona – his generation had suffered a fate almost as embarrassing in slipping to Cameroon in 1990.

The Saudi Arabian defeat is far worse, but a draw against Iceland and a defeat to Nigeria in 2018 again exposed a fragility, such is the desperation to get their hands on the World Cup again.

Saudi, on the other hand, summoned the spirit of 1994, when their compatriots beat Belgium and Morocco to reach the last 16. Saudi knew an apparent mismatch in talents could be turned to their advantage.

“Sometimes your opponent is not at his best motivation,” Renard said. “This is normal.

“It’s also happened to us sometimes when we play a lower team. This is sometimes what the people do not understand.

“Do you imagine Lionel Messi [is highly motivated] against Saudi Arabia? Of course he will say ‘we need to start very well’ but you know motivation is not like they play Brazil. This is normal, this is part of football.”

Sheer will to win

There were audible gasps throughout the stadium as Yasir Al Shahrani took a knee to the head from Al Owais. His teammates looked concerned as medics stretchered him off. It was a typical show of togetherness from a side putting it all on the line. Saleh Al Shehri and Salem Al Dawsari scored a quickfire double soon after the restart to put Renard’s men ahead. But the true heroes of the day were the salmon-like leaps of Mohammed Al Owais and the four all-action defenders in front of him.