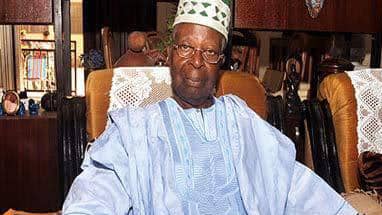 Nigeria’s first-ever surveyor-general of the federation, Daniel Omoigui is dead.

In a statement on Friday on behalf of the family, Sota Omoigui, his son, said the older Omoigui died on Thursday at the age of 91.

‘The family of Surveyor Daniel Aiyanyo Omoigui of the Egite family, Isi, in Uhunmwode LGA, Edo State and the entire Egite family of the Edo Kingdom and Barrister Mrs Grace Onaiwu Omoigui nee Asemota (late) and the entire Asemota family of Ogbe Quarters, Oredo LGA, Edo State, is heartbroken yet thankful for a life of legacy well spent as we announce the passing of our dearly beloved father and grandfather – Surv. Daniel Aiyanyo Omoigui – who was called to rest in the Lord on November 24, 2022,” the statement reads.

He started school at the age of three in the village, went to a number of primary schools and in 1939, joined Benin Baptist School, starting from form II.

He finished his secondary education in 1949, and in 1950, he took up a teaching job at Niger College, Benin, while he enrolled for studies at the Rapid Result College, now known as Distance Learning.

He gained admission to study mathematics the University of Ibadan in 1953 and graduated in 1957.

He joined the federal surveys department in 1957 and worked in different parts of the country. In 1969, he was in charge of investigations, delimitation, demarcation and maintenance of international and interstate boundaries.

In 1970, he participated in the Nigeria-Cameroon boundary negotiations.

As director of federal surveys, he lead the establishment of the National Boundaries Commission, and the Surveyors Registration Council (SURCON).

He was in office as surveyor-general of the federation between 1986 and 1988.