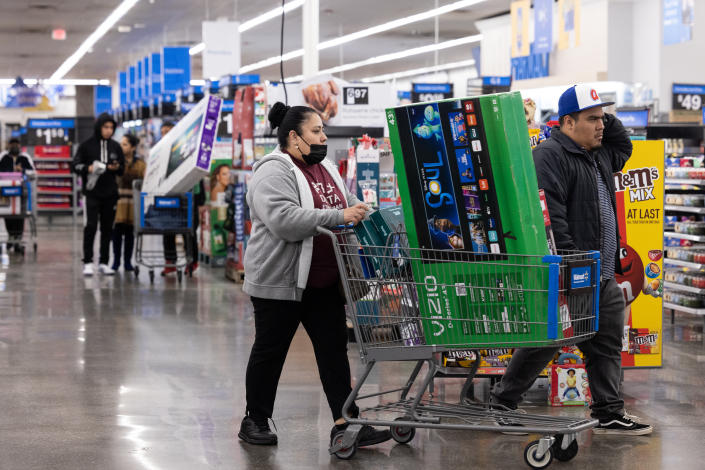 Aimee White is worried about inflation and is fearful of a recession, but she’s not letting this impact her holiday spending.

“We’ve been through so much over the past couple of years so even though the economic situation is difficult, and we’re not exactly flush with cash, we need to let our hair down and enjoy ourselves,” she said. “This year, it’s full steam ahead for a holiday extravaganza.”

This sentiment is echoed by countless other Americans, said Rod Sides, Global Leader of Deloitte Insights, especially by lower-income consumers who may have sat last year out.

“We’re seeing greater participation among lower-income households (those who earn less than $50,000 per year),” Sides said. “They’ve settled into the ‘new normal,’” and are feeling more stable — and hopeful — given wage growth, said Sides. “They’re going to jump in and spend.”

Sides said this group of shoppers plan to spend an average of $671 this holiday season. That’s 25% more than last year.

Add it all up and spending, overall, will match 2021 levels at $1,455, said Sides. “But with inflation running in the 8% range, we’re spending differently.”

For starters, many consumers across all income groups are trimming their lists.

“The first to go is extended family (29%) and friends (21%),” according to Vipin Porwal, consumer expert and CEO at Smarty, a popular cash back and coupons portal.

Mike Murphy not only slashed his list from 15 recipients to four (immediate family members only), but changed his gift-giving focus.

“This year, it’s about sentimentality and usefulness of the present,” said the 35-year old founder of Fluent in Coffee, a resource for coffee aficionados.

Murphy, who lives in Washington, D.C., said he’s going to buy his brother a portable heater, make a photo album for his girlfriend, and turn a family portrait into a puzzle for his parents. “I look at the holiday season in a different light these days.”

So does Jared Weitz.

“With everything costing more, I’m buying with more intention and purpose this year,” said the 40-year old financial services executive.

Weitz said he’s loading up on gift cards and gift certificates this holiday season — for family, friends, and business associates. He’s not alone.

“Consumers are cutting back across every category — apparel, electronics, toys and even things like home goods and durables, which exploded during the pandemic — but we’re seeing big growth in gift cards (up 7%) as consumers look for ways to control their budgets,” Sides said.

Nicole Booz is one such consumer.

The 32-year old lifestyle blogger is planning on taking her two sons, ages 1 and 3, to see Nickelodeon’s hit show — PAW Patrol Live — when the theatrical production makes its way to Hershey, Pennsylvania, in January 2023.

“The memories my husband Jon and I make taking our boys to something they love will last longer for both them — and for us — than anything physical we can buy,” she said.