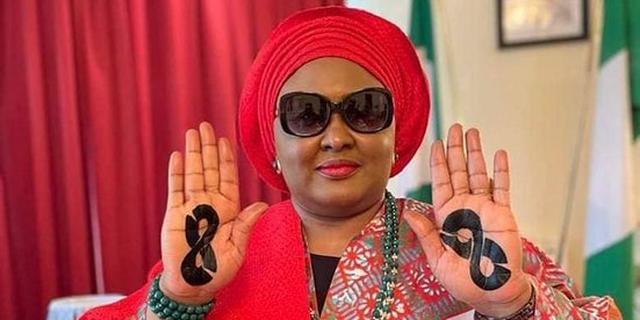 Aisha Buhari, the wife of President Muhammadu Buhari, has urged Northern political leaders to follow the lead of their southern counterparts in appointing women as Deputy Governorship candidates.

Aisha, who made this call in an Instagram Post on Tuesday, expressed her commitment towards resolving the crisis in the Adamawa State chapter of the All Progressives Congress (APC).

The characters in the crisis are; Aishatu Binani, senator for Adamawa Central, defeated Nuhu Ribadu, former chairman of the Economic and Financial Crimes Commission (EFCC), and Jibrilla Bindow, former governor of the state, in the May 26 governorship primary.

Ribadu who was dissatisfied with the primary election results filed a lawsuit to overturn Binani’s victory.

In October, a Federal High Court in Yola, Adamawa’s capital, declared the primary null and void.

However, in a ruling issued on Thursday, November 24, the state’s appeal court reinstated Binani’s candidacy.

However, the first lady was said to have pitched her tent with Ribadu during a meeting of Adamawa APC stakeholders last week.

Breaking her silence on Tuesday, the first lady, who is a native of the state, said in an Instagram post: “In the name of Allah, I wish to thank Adamawa State APC Leaders for the courtesy visit they paid on me, on November 18, 2022.

“As an indigene of the State, a mother a Grand Mother and the First Lady of the Federal Republic of Nigeria, I would like to reaffirm my support for the genuine concern of our party leaders, as well as COMMIT TO STEPPING INTO THE PROBLEM so that reason and common sense will prevail in Adamawa politics.”

“I would again like to repeat my appeal to respected leaders in the North to learn from the exemplary practice of their Southwest counterparts in enthroning women as Deputy Governors in states as a gradual approach to obtaining gender inclusion in our polity.”