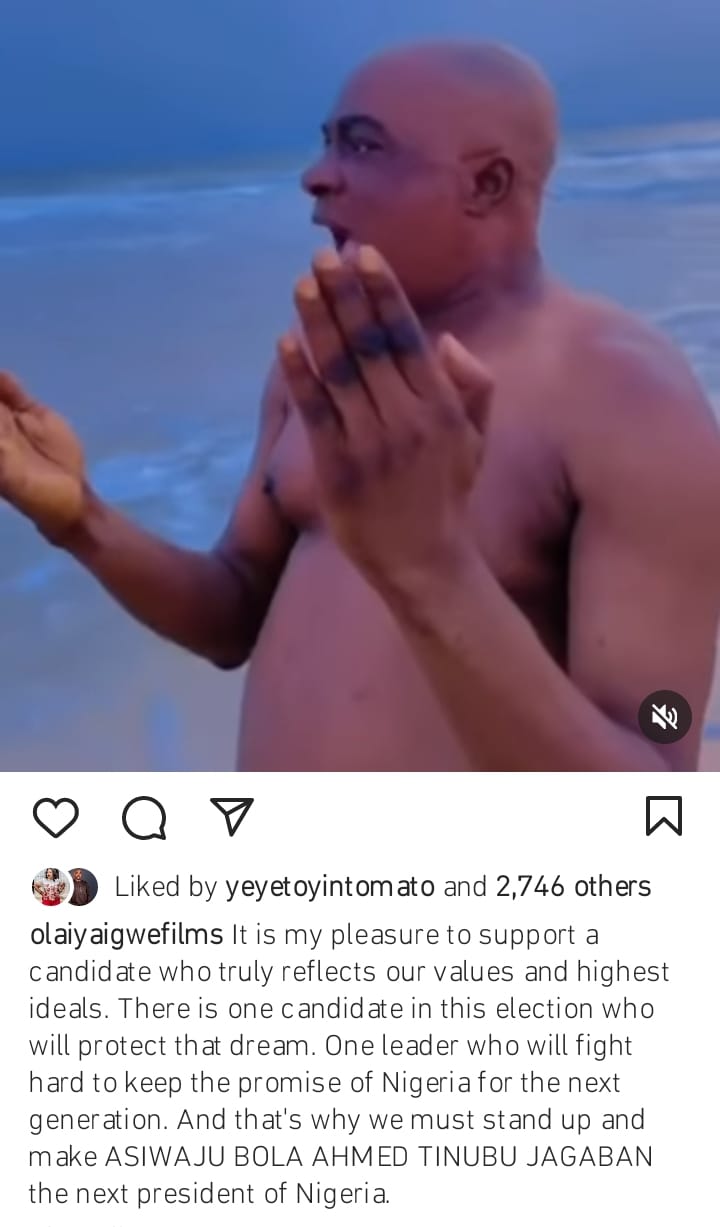 The actor shared a video of him, naked, offering prayers for the victory of APC Presidential Aspirant, Bola Ahmed Tinubu.

In his caption, Olaiya revealed that it is his pleasure to support a candidate who truly reflects our values and highest ideals.

He believes that BAT would be the best to protect our dreams and fight hard to keep the promise of Nigeria for the next generation.

“It is my pleasure to support a candidate who truly reflects our values and highest ideals. There is one candidate in this election who will protect that dream. One leader who will fight hard to keep the promise of Nigeria for the next generation. And that’s why we must stand up and make ASIWAJU BOLA AHMED TINUBU JAGABAN the next president of Nigeria”.

One Family Doctor wrote, “You said votes of Tinubu should be like the Atlantic ocean or even be more than it. How many are Nigerians again? 200 million people right? Even the whole world population is 8 billion people. Is the Atlantic ocean not more than the whole world put together??? So how will Tinubu’s votes be now more than the world population put together?? A ma was daran bai o olorun, just because of stomach infrastructure.

One Kafila Murital wrote, “Haaaaaaaa see what poverty has done to our elders has olorun jo yo was ninu Oko eru oo, you need medical checkup sir

Lanle Hintobo wrote, “Someone should please check on Olaiya Igwe. This man is running mad!!!

One Mr White wrote, “How much did they pay you? Are your kids proud of all this that you are doing. Just because of money

One Rex McCarthy wrote, “Nah him wife give am money for surgery when no one came thru for him. Let him show his appreciation in his own way he feels

One Ludahxx wrote, “Me I think say this man dey educated o

One Oghy Pero wrote, “Omo! There are so many things to be grateful for in my life..how shameful is it when person papa and grandpa dey bo pata for social media

One Razzy Money wrote, “This is completely bullshit man

One IfeOluwa wrote, “See what poverty has done to our elders u need checkup daddy wa @cassy___0307 comma see ooo

One Dejavu wrote, “Be like say them don promise you say them go use you do chairman for your street Abi. Esin leleyi sir”.

This isn’t the first time they are all pulling out their weight for the former governor of Lagos State.

Taking to Instagram, Yinka Quadri shared a video of many of his colleagues drumming support for him.

Yinka Quadri credited Bola Tinubu for influencing many actors to venture into politics.

“I, Alhaji Olayinka Quadri pledge my support for BAT not because I was paid to do so but because of Asiwaju support and influence to all and sundry over the years. Majority of actors who venture into politics today do so because of the influence of Asiwaju Bola Ahmed Tinubu. By God grace, Asiwaju will move from Jagaban of Lagos to Asiwaju of Nigeria. For all your sacrifices, for all your effort, God will reward you this time…. If we look at the rotation of leaders in Nigeria over the years, it is very crystal clear it is Yoruba turn to be president.
BAT, Eyin lol kan (you’re the next)”.