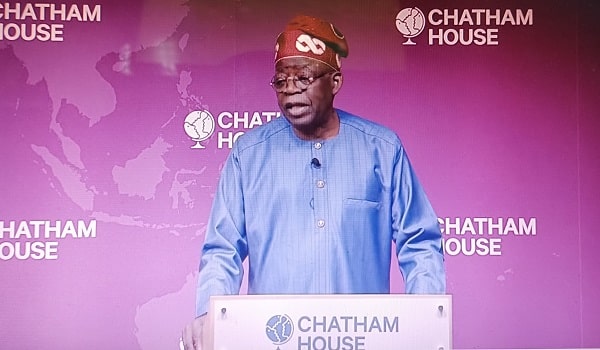 The presidential candidate of the All Progressives Congress (APC), Bola Tinubu, has expressed worry over the planned electronic transmission of results in the 2023 general elections.

CityNews reports that Tinubu said the Independent National Electoral Commission (INEC) has not assured Nigerians of the reliability of the electronic transmission of election results.

The former Governor of Lagos State stated this on Monday during an appearance at Chatham House in London, the United Kingdom.

According to Tinubu, Nigerians in the diaspora should be entitled to vote in future elections because they make contributions to the economy through remittances.

He said: “If you make contributions to the economy with the remittances that you are making, your right to vote should not be abrogated but promoted.

“However, we are still building confidence in our democratic and voting system. INEC is still yet to assure us during this election that electronic transmission; the technology being used for accreditation, and the total votes count is reliable, dependable and assuring in our democratic process before we introduce a complicated element of ballot.”

Tinubu was accompanied to the world-leading policy institute and think-tank alongside the Speaker of the House of Representatives, Femi Gbajabiamila; Kaduna State Governor, Nasir El-Rufai and his Jigawa State counterparty, Abubakar Badaru; former Ekiti State Governor, Kayode Fayemi; amongst others.