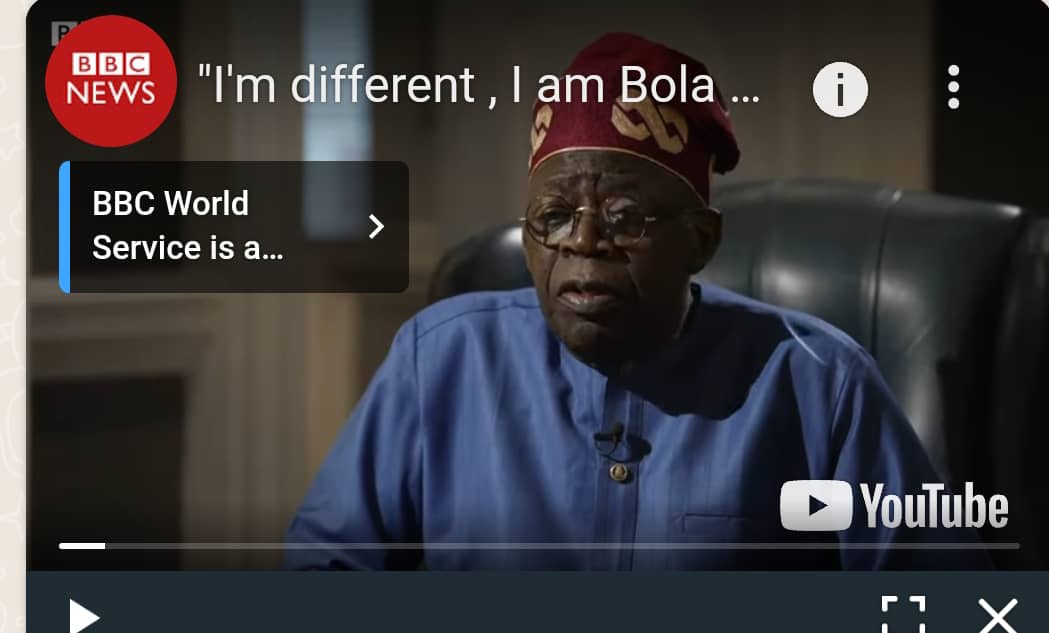 Have you seen the footage of Tinubu’s BBC interview that has gone viral? It is important that we all watch and listen to the video because Tinubu made his points clearly. Here are the key takeaways from the interview that is now tearing the internet apart.

When asked how prepared he was, Tinubu responded that he was on the front lines of the race, which is why everyone was shooting arrows his way. Regarding security, Tinubu provided evidence to support Buhari’s efforts.

A total of seventeen local governments were completely under insurgent control before Buhari took office, and four states were under siege. Today, not a single local government is under insurgent control, despite the fact that threats still exist. This is a significant truth that cannot be refuted on the basis of reality, except for the typical propaganda that the haters are quick to spread.

Tinubu spoke about employment, looking into the subsidy issue and making a final decision, as well as monetary policies and infrastructure development.

Tinubu boasted of his success in Lagos, which has never been reproduced by any other state, in turning 600 million IGR into over 5 billion.

Let me resort to the Bible to back up my point. May God bless Tinubu (Amen), Let’s open our Holy Books to (Luke 19.11-27) which speaks about the three servants, verse 14  The kingdom is also like what happened when a man went away and put his three servants in charge of all he owned. 15 The man knew what each servant could do. So he handed 5,000 coins to the first servant, 2,000 to the second, and 1,000 to the third. Then he left the country.

So they made a return on their investment, and now we’ll hear what the STINGY man has to say., “24 The servant who had been given 1,000 coins then came in and said, “Sir, I know that you are hard to work for. You harvest what you don’t plant and gather crops where you haven’t scattered seed. 25 I was frightened and went out and hid your money in the ground. Here is every single coin!”

Let us now proceed to the custodian of the kingdom’s verdict., verse 26 The master of the servant told him, “You are lazy and good-for-nothing! You know I harvest what I don’t plant and gather crops where I haven’t scattered seed. 27 You could have at least put my money in the bank, so I could have earned interest on it.”

READ ALSO:   2023:Your Presidential Tickets Must Come To Us -S/East Leaders Tell PDP,APC

The Bible provides all the answers, but Tinubu’s explanation about his own wealth and money in general was the killer. He confirmed that he was wealthy and had inherited a large sum of money. He also had a brilliant background, was a first-class graduate, and was a master accountant. As the first servant, he had quadrupled the money entrusted to him and grown richer.

Now, let me ask you: What do you think a man who transformed 600 million into 5 billion for a state in months would do with his own money? Charity starts at home, and Tinubu has the wand. If he can act selflessly for his state, he will do everything for his own financial gain to improve his wealth. Get this into your heads and experience serenity.

You believe Tinubu, who can transform public wealth into assets, cannot transform his own personal wealth into tremendous fortune? People are funny everywhere.

When asked what he planned to do differently than Buhari, Tinubu responded, “I am different because I have created Lagos into a country unto itself…the fifth largest economy in Africa.”

Imagine how Tinubu subdued the Atlantic Ocean surge in Nigeria, which might have wiped away a portion of Lagos and killed millions. Eko Atlantic is now set to house the United States’ largest mission home outside of American territory.

WETIN DEM DEY TALK? Tinubu remains the best governor to date, and all the arrows aimed at him are motivated by envy. Tinubu asked his doubters, “Are they enemies of wealth?” If they are not anti-wealth, they should understand that investment pays off.

Oya drop Asake for DEM, make dem know say Tinubu no b their mate, ” Apala no be soca, see my team dem no be feeders…Premier League is not UEFA, small body, my engine bigger gan ni (l’Eko)”

Tinubu has set the pace for others to follow. Tinubu is the GOAT.(Greatest Of All Times)