Home Politics 2023 2023: Power can only shift if APC, PDP pick their presidential candidates... 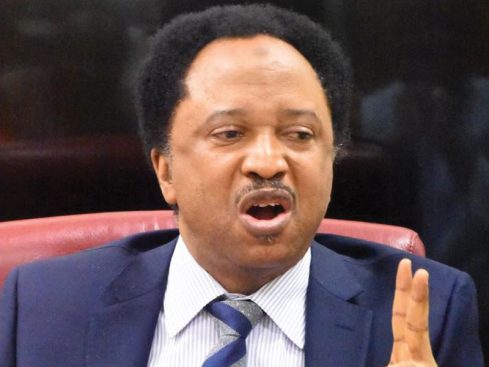 Former Senator representing Kaduna Central, Shehu Sani has said that it is possible for power to shift from the North to South in 2023 only if the two major political parties, the All Progressives Congress (APC) and the People’s Democratic Party (PDP) resolve to pick their presidential candidates from the South.  Sani in this interview with GYANG BERE in Jos, expressed fear that if the parties decide to choose their candidates from the North and the South, there is a tendency that people will vote based on religion, ethnicity and regional lines.

Sani admonished the South West and the South East to resolve their political differences and come up with a common position that the entire Southern region with rally round for a smooth power shift to the South in 2023.

The North is confronted with insecurity and religious crises, how do you think the region can get out of these challenges?

First, there is a need for leaders like General Yakubu Gowon, Gen. Abdulsalami Abubakar to lead a conference in the north that will bring together, religious leaders, traditional rulers, community leaders, civil society and see how the likes of General Aliu Gusau will come together to address our religious and ethnic issues in the North and come up with a template of what the region intends to achieve the next 10 to 20 years and the resolution should be institutionalized in all the states in the North. This will include finding solution to banditry in the North West, finding solution to Tiv/Jukun crisis in Taraba state; the perennial religious crises in Plateau state and addressing the religious disharmony that happens between Muslims and Christians in the region. I think  there is nobody that is properly placed than the Northern Governors Forum and the Federal Government to lead a retreat or a conference rather than our former leaders irrespective of their political party affiliation. Gen. Yakubu Gowon, Gen. Abdulsalami Abubakar and Gen. Aliu Gusau and other political leaders like Paul Unongo and so many others can come together and find solution to these problems. We need to have a document for peace, to end our ethno religious crisis in Northern Nigeria.

What practical solution do you have for crisis in Southern Kaduna?

I think the first thing the President needs to do is to give audience to people of Southern Kaduna. Invite their elders, community leaders and religious leaders, political leaders, their youths and women should be selected from all the local governments to sit down with Mr. President to find out solution to the problem in the area. Another thing that the President needs to do about Southern Kaduna is to set up a Presidential committee of not more than seven members, which will include people like Col. Dangiwa Umar, Lawal Jafaru Isa, Mohammed Makarfi, Martin Agwai who have been able to achieve alot in terms of restoring peace in Southern Kaduna, a Presidential committee comprising these people will be able to give the President a realistic, objective and fair practical steps in solving the problem. One of the reasons why the problem in Southern Kaduna cannot be solved is that the President only listens to the Governor and the Governor and people of Southern Kaduna are apart, he can’t solve that problem. The names that I have mentioned, I believe have fair knowledge of what is happening in Southern Kaduna and we should also not confuse the problem in the area. The killing in Southern Kaduna is carried out by bandits who go about raiding villages, raping women, killing children and displacing people; this is different from the problem of the last four decades of religious crises, this is a different thing. What people are trying to do now is to say the killing is reprisal, or revenge, but for me, it is not a revenge because no Muslim is killing Christians and no Christian has killed Muslims for now, it is terrorists that are targeting the people of Southern Kaduna and killing them, you shouldn’t bring what has happened in the last three to four decades and try to justify the pure terrorist activities that is happening in that part of the country.

There have been arguments between critical stakeholders from the North and the South about which region should produce the president in 2023, what is your view about that?

On where power should swing to in 2023, in a multi ethnic and multi religious state like this, it is important that we understand the reality of our history, of our crises and never repeat the same mistake again. We cannot deny the fact that ethnicity, religion and sectionalism; particularly nepotism has been a serious threat and impediment to the unity of our country. It is not about competent persons or rotational presidency; it is preserving the unity of the country. It is unsafe for one part of the country to dominate the political affairs of the country in the name of democracy; it is unfair and unjust and a serious threat if we say the national anthem belongs to all of us, the national flag belongs to all of us, the national pledge belongs to all of us, let there be the practicalization of those things that belong to all of us. We can have a democracy and rotational presidency at the same time as much as one part of the country is able to produce a leader, another part of the country should be able to produce a leader. It is unfair to say because you are Igbo, you are Berom, you are Nupe, you are Kanuri, you are not the majority so you cannot produce a leader. It is only when you have a country that you can have democracy, it is only when you have a country that you can say your ethnic group is the majority, if you don’t have a country, where will you use as a territory to say you are majority in numbers and I think that should be clearly understood.

Do you think power shift from the North to the South is possible in 2023?

Yes, I think the shift of power from the North to the South is possible under these conditions that I am going to give. It is possible only when all the major political parties resolve to bring out candidates from the Southern part of Nigeria, if one political party brings one candidate from the North and another from the South, then you can expect what will happen. So, this is not simply a party thing, it’s simply about our country. It is unfair to think that God has ordained one part of the country to always produce leaders because they are more in number, it is wrong for you to think that. As far as I am concerned, it is fair for all the geopolitical zones in Nigeria, if the North is in power, it is fair for the South to also be in power but people used to ask, should it go to the South West or should it go to the South East? I think it is up to the people of the South to decide where the power is going to go. But we shouldn’t deceive ourselves that the historical disharmony, discontent and disunity between the South West and the South East have always been to the advantage of the North. So, the first condition is power can move easily to the South if the two major political parties all resolve to keep Nigeria safe as one on the ideals of the rotational power. Secondly, it is possible if the people of the South have agreed to put their house in order and resolve that this is what is going to happen. If two political parties, one fields the South, another fields the North, it will be easy for people to vote for the one that comes from their region because ideals differ from reality. The thinking of Shehu Sani who is an idealist, an activist and a progressive might not be the same with a tomatoes seller, the fisher man or the market woman on the street and for every Shehu Sani that believes on the rotation of power, there are hundreds of people that are informed about that but they will vote based on their religion, tribal background or section. It is not going to be a straightforward thing.