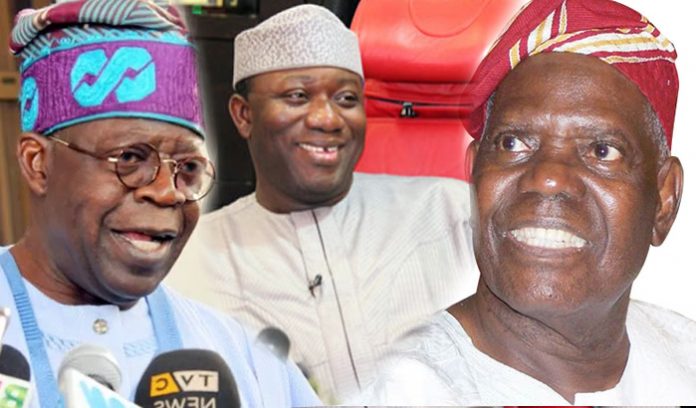 The Afenifere Renewal Group(ARG), has said prominent Yoruba leaders in the All Progressives Congress (APC) would be blamed if the southwest fails to clinch the presidential ticket of the party in 2023 due to unwarranted divisions.

The ARG said the APC National leader, Asiwaju Bola Ahmed Tinubu, party’s pioneer Chairman, Chief Bisi Akande and the Chairman, Nigeria’s Governor’s Forum, Dr. Kayode Fayemi should deploy their strategic positions to unite the zone and clinch the presidential ticket that may likely be zoned to the South in APC.

The socio-cultural and political body also advocated for what it called “classical restructuring” of the country that would correct the highly entrenched lopsidedness in all zones and ethnic groups in phases.

Addressing journalists in Ado Ekiti, on Saturday, the ARG Publicity Secretary in Ekiti, Prince Michael Ogungbemi, said with the impression that the APC may zone the presidency to the South after President Muhammadu Buhari’s two terms in office, the Southwest has the prospect of occupying the position and lead Nigeria to prosperity.

He said: “About 2023, ARG had met and we had concluded that the Yoruba nation is ready to lead Nigeria. We have a blueprint that we can present to any presidential candidate that can bring better democratic governance to all Nigerians.

“The southwest is ready to take over. We have human and material resources.
The political leaders must go on consultations. We have six geopolitical zones, Southwest is just a block. Tinubu must lead this block. Also, Luckily, Dr. Kayode Fayemi, who is the NGF Chairman, is from the southwest.

“They must move for a united family to clamour for presidency for the southwest and produce a unified front. If they can speak with one voice, we will actually clinch this ticket, because it is our turn.

“We can’t go into that race with a divided house. Tinubu, Fayemi, Akande, Chief Reuben Fasoranti, Gen. Alani Akinrinade, Prof Banji Akintoye, Senator Femi Okurounmu, Senator Ayo Fasanmi , Aare Afe Babalola(SAN) and others must convey a meeting of the progressive politicians in the zone so that we can be United. If we have a candidate that is acceptable to both the North and the South, we will surely win.

“But Yoruba nation will blame Tinubu, Fayemi and Akande, if the southwest fails to clinch the ticket”, he stated.

Speaking about restructuring, the ARG Chief told President Muhammadu Buhari that the country can’t run away from it, saying it remained the best panacea for peace and unity among diverse Nigerian citizens.

“Governance under presidential system is very powerful and costly, but with power residing in the states and local governments, things will be better. We must must have a roundtable referendum to achieve this. It is not to satisfy certain groups, it will bring geometric progressive order, because we have not been moving at the right pace,” he said.