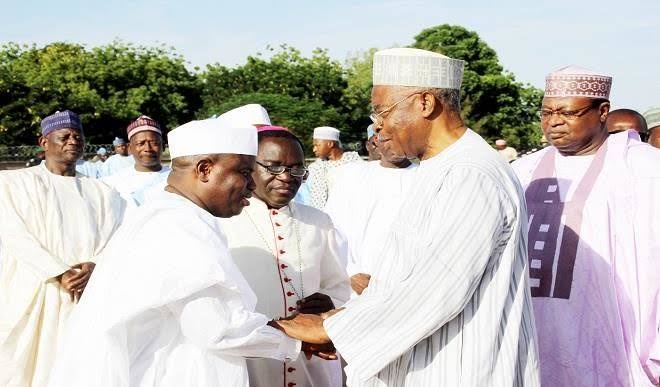 Sokoto State Governor, Hon. Aminu Tambuwal, has begun consultations with some notable political leaders over his presidential aspiration on the platform of the Peoples Democratic Party (PDP).

Thisday reports that the consultations started last Thursday when he met former Senate President, Senator David Mark, during which he discussed his ambition with him.

Tambuwal was to continue the consultation on Saturday with visits to a former president, Chief Olusegun Obasanjo, and a former Minister of Defence, Lt. Gen. Theophilus Danjuma (rtd).

The governor had met behind closed doors with Obasanjo for about an hour in his Presidential Library Pent House in Abeokuta.

A statement by Obasanjo’s Special Assistant on Media, Mr. Kehinde Akinyemi, had quoted the governor as saying he visited the former president to consult with him on issues concerning governance and others.

“You know Baba is our leader, statesman. And it is always good for us to come around to see how he is doing, pay homage and consult him on many issues of governance. That is why we have come this afternoon. And, we brought him the greetings and felicitations of the good people of Sokoto State,” the statement had quoted the governor, who was a leading contender for the presidential ticket of the Peoples Democratic Party (PDP) in the 2019 election season, as saying.

However, it was gathered that the main reason for the visit, which the former president’s aide described as unscheduled, was for Tambuwal to feel Obasanjo’s pulse on his presidential bid.

Sources confirm that the meeting with Obasanjo, Tambuwal headed for Lagos where he held talks with Danjuma in his residence.

He was said to have briefed the former minister on his decision to vie for the presidency in 2023.

The meeting was said to have lasted for over two hours before the governor departed for Sokoto.

However, PDP National Working Committee (NWC) has not officially announced the party’s zoning arrangement for 2023 presidential ticket, the main opposition party is said to be waiting for the ruling All Progressives Congress (APC) to make a decision before announcing from which zone its candidate would come from.

When contacted, PDP National Publicity Secretary, Mr. Kola Ologbondiyan, for his comment on Tambuwal’s consultations, he said zoning was not yet on the agenda of PDP.

Recession: Nigeria’s Economy Is Better,Compared To Others – Lai Mohammed