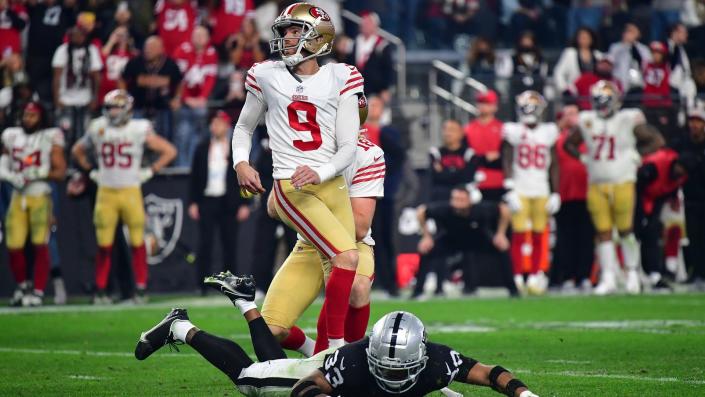 The end of the NFL regular season is in sight. Some teams look like they’ve already packed their bags for Cancun, while others are hitting their top gear with eyes on the ultimate prize.

The Chicago Bears rolled into Detroit with dreams of playing spoiler against the Lions. They were embarrassed 41-10 in a game that showed just how much work general manager Ryan Poles has to do in the offseason.

While the Bears were getting pantsed in Mo-Town, the Packers torched the Vikings to put themselves in pole position for the final NFC wild-card spot. In Tampa Bay, Tom Brady finally connected with Mike Evans. Then, he did it again and again as the Bucs clinched the NFC South with a win over the Panthers.

Meanwhile, the Patriots did just enough to beat Teddy Bridgewater and Skylar Thompson, Kenny Pickett kept the Steelers’ playoff hopes alive, and the Eagles are finding out just how valuable Jalen Hurts is (answer: very).

Here’s where each team stands after Sunday’s Week 17 action.

30. Indianapolis Colts (4-11-1): Jeff Saturday should be back on ESPN in about seven days.

29. Chicago Bears (3-13): As good as Justin Fields has been with his legs, games like Sunday show he still has a long way to go to become a proven commodity as a passer.

28. Arizona Cardinals (4-12): With Kyler Murray likely out for most of next season, this offseason might be a good time for the Cardinals to start a soft rebuild.

27. Atlanta Falcons (6-10): Desmond Ridder has yet to throw a touchdown or an interception in three starts, but he put a notch in the most important column Sunday by leading the Falcons to a come-from-behind win over the Cardinals.

24. Carolina Panthers (6-10): Sam Darnold couldn’t save us from the pain of watching the Bucs in the playoffs, but has he done enough to earn another year in Carolina?

23. New Orleans Saints (7-9): If I’m the Saints, the price for a team to hire Sean Payton starts at two firsts. No less.

22. Tennessee Titans (7-9): Josh Dobbs got off the bus and threw for 232 yards against the Cowboys. That’s almost as many yards as rookie Malik Willis has thrown for in his three starts this season (276). The Titans can’t start Willis against the Jags in Week 18.

20. Cleveland Browns (7-9): Deshaun Watson started to look like himself in the second half against the Commanders. That’s good news for the Browns and bad news for those of us on the side of karma.

19. New York Jets (7-9): Just because Mike White is better than Zach Wilson doesn’t mean he’s the answer. The Jets missed the playoffs for the 12th straight season and now enter the offseason with a ton of questions to answer.

18. Miami Dolphins (8-8): With Tua and Teddy likely out for Week 18, the Dolphins’ playoff hopes are in the dumpster. Better start tampering with Tom Brady again.

16. New England Patriots (8-8): Our most likely choices for the final AFC wild card spot are Mac Jones, the zombie Dolphins and Kenny Pickett. Not great.

15. Seattle Seahawks (8-8): The Seahawks’ playoff hopes rest in the hands of Geno Smith and Jared Goff in Week 18. I’ve been in worse predicaments.

14. Tampa Bay Buccaneers (8-8): I know the Bucs have been a train wreck this season, but don’t count out Tom Brady in the playoffs.

13. Detroit Lions (8-8): The Lions have done a fantastic job building their roster from the lines out. The Bears might want to take some notes.

10. Baltimore Ravens (10-6): I don’t even think Ravens fans believe this team is a legitimate Super Bowl contender, with or without Lamar.

9. Jacksonville Jaguars (8-8): The NFL didn’t do the Jaguars any favors by putting their winner-take-all Week 18 game on Saturday. Jags will have just five days of rest before facing Josh Dobbs. OK, maybe it’s not that big of a deal.

7. Los Angeles Chargers (10-6): Nobody wants to face Justin Herbert and the Chargers in the playoffs. Nobody.

5. Buffalo Bills (12-3): I still wonder if the Bills have enough to make it through the AFC gauntlet. They ask A LOT of Josh Allen.

4. Philadelphia Eagles (13-3): We can put the “Jalen Hurts is a system quarterback” talk to bed now. He is the system.

2. Cincinnati Bengals (11-4): Monday night gives us our first Josh Allen vs. Joe Burrow matchup. Might see a second one a few weeks down the line. Get your popcorn ready.

1. Kansas City Chiefs (13-3): Patrick Mahomes and the Chiefs are back on top. Same as it ever was.