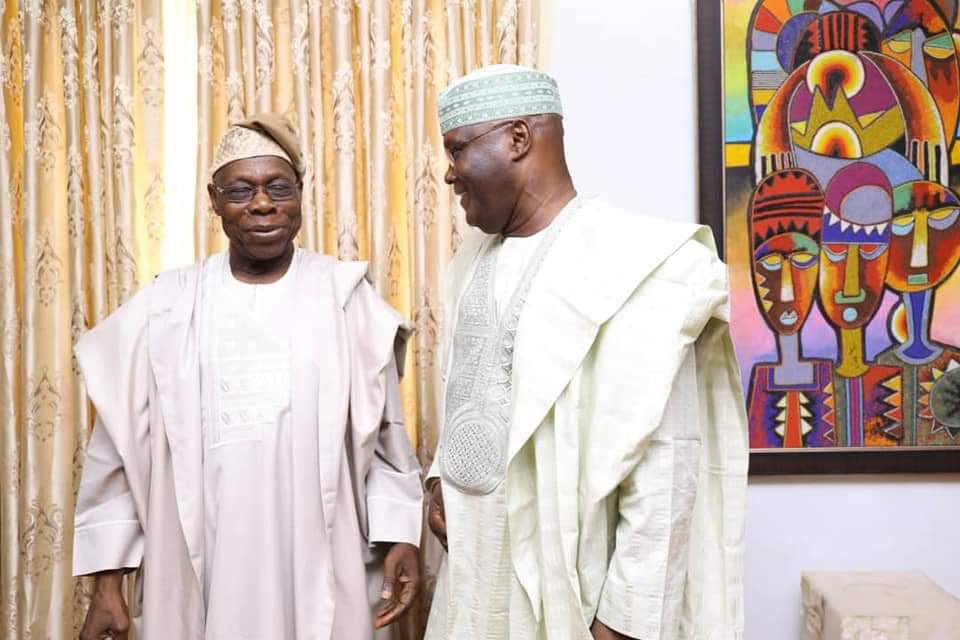 The presidential candidate of the Peoples Democratic Party (PDP), Atiku Abubakar has taken another swipe at former President Olusegun Obasanjo over the endorsement of Labour Party (LP) candidate, Peter Obi.

Atiku in a statement through the Director of Public Affairs of the PDP Campaign Council, Senator Dino Melaye urged his former principal to stop behaving like he hold the key to Aso Rock.

He said Obasanjo has always tried to influence who becomes the President of the country and feels he knows best on who should lead the country because he (Obasanjo) wants to be in charge always.

Melaye in the statement titled “Atiku’s God does not live under the rock (Abeokuta), also pointed out that Atiku’s only ‘sin’ was trying to assert his constitutional independence when he was the Vice President under Obasanjo’s administration.

Not done, Melaye mocked Peter Obi saying he is been set up to become an errand boy to Obasanjo as the former President wants a Nigerian leader whose main office would be in Abeokuta with the annex office in Abuja.

He said in the statement: “To be sure, he (Obasanjo) has tried to impress as the facilitator of succeeding presidents of Nigeria. Ironically, this attitude has grouped him among those euphemistically tagged ‘Owners of Nigeria’. His recent advisory on the February 25 election is another testimony to his misconception of being an electoral janitor who can padlock and unlock Nigeria’s electoral fortune at will.

“In the period preceding the 2015 elections, Obasanjo, in his characteristic janitorial expedition, aligned with the marketers of false change. He even tore the membership card of the Party that gave him the opportunity to be President of Nigeria for 8 years. He also appeared in photo opportunities with Buhari and the All Progressives Congress (APC).

“A few months after Buhari’s election, Obasanjo realized that he had misled himself and many Nigerians. He tried to fight back in 2019, but by then, Buhari had designed some unorthodox ways to remain in power.”

Melaye added that the endorsement of Obi by Obasanjo is highly hypocritical and Nigerians should not allow themselves to be deceived.

He continued: “It is hypocritical and politically heretical to appeal to Nigerian youths to take their turn by supporting a candidate who is far older than many other young Flagbearers.

“This is the facade in Obasanjo’s postulation. Neither Nigerian youths nor other discerning electorates are deceived anymore. They have taken the full grasp of JOB 32:9 (CSB): “It is not [only] the old who are wise or the elderly who understand how to judge.”

Why Obasanjo Is Not Supporting Atiku

The former Kogi Senator also accused Obasanjo of not supporting Atiku because he knows the loyalty of the PDP candidate would not be to him but to Nigeria and the country’s constitution.

“It is not surprising that Obasanjo is not supporting His Excellency Atiku Abubakar in this election. If the permutation of the electoral janitors is to be the thread to direct the needle where it should go, Atiku surely does not fit that configuration. One of the unpardonable ‘sins’ that Atiku probably committed while working with Obasanjo was the assertion of his constitutional independence, when he declared that the loyalty of the holder of the office of the Vice is to the Constitution and not to the President. Atiku will be loyal to Nigeria, but he will not worship at the altar of political deities.

“The good side of Obasanjo’s self-serving electoral sermon is the advance warning that Peter Obi is being supported to serve as an errand boy to Obasanjo. Nigerians should not forget that Obasanjo had been accused of making the running of his domestic kitchen the highest office he gave to a South Easterner during his tenure. He is, therefore, on another exploitative voyage,” he submitted.