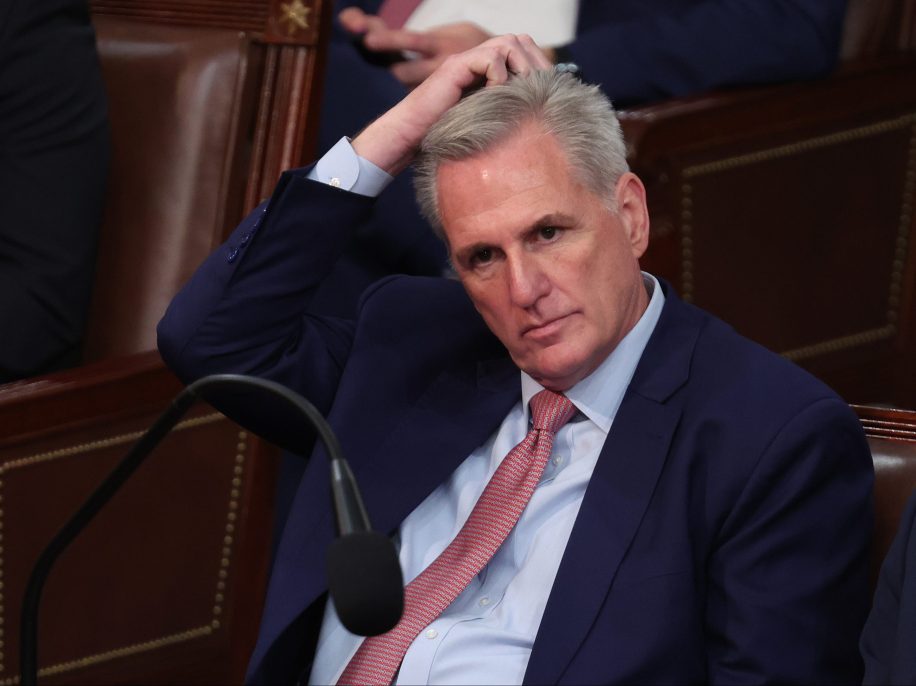 The House remained paralyzed on Wednesday, after Republican leader Kevin McCarthy failed for the sixth time to capture the speaker’s gavel as his critics stood firm in their opposition to his candidacy. After the House adjourned for a few hours, McCarthy and his allies went into negotiations with the Republican holdouts without a clear path forward to end the standoff, then pushed back a seventh vote on the House leadership until Thursday.

The House held a total of three inconclusive votes in the speakership election on Wednesday, mirroring the three votes held a day earlier. Across all six ballots, no speaker candidate successfully captured the 218 votes expected to be needed for a victory. The stalemate marked the first time in a century that a House speaker was not chosen in the initial vote. After the sixth vote on Wednesday evening, the House moved to adjourn until at least 8pm ET, giving Republicans more time to reach a solution, then pushed back the deadline again, voting to adjourn until noon the following day.

“It looks messy,” said congressman Mike Gallagher, a Republican from Wisconsin, in a speech nominating McCarthy for speaker on Wednesday, “but democracy is messy.”

One congressional reporter wrote that it felt like Groundhog Day on Capitol Hill, referencing the classic film where the protagonist is forced to relive the same day over and over again, while the president called the stalemate “embarrassing.”

On the sixth ballot, McCarthy earned just 201 votes, and all 212 Democrats voted for the minority leader, Hakeem Jeffries of New York. Twenty conservatives opposed to McCarthy’s bid rallied behind congressman Byron Donalds of Florida, while congresswoman Victoria Spartz of Indiana, who had supported the Republican leader in earlier rounds of balloting, voted “present”.

Explaining her vote, Spartz said Republicans should “stop wasting everyone’s time” and reconvene only when they have enough votes to elect a speaker.

Despite rounds of negotiations and a plea for unity from Donald Trump, McCarthy’s prospects appeared dimmer after his sixth failed attempt to become speaker. In remarks nominating Donalds for speaker on the fifth vote, far-right conservative congresswoman Lauren Boebert suggested that Trump reverse course and tell McCarthy: “It’s time to withdraw.”

But, hours later, McCarthy supporters were more upbeat as Republicans narrowly won a vote to adjourn the House until Thursday, suggesting to Capitol Hill reporters that a deal to elect McCarthy might still be within reach.

All House business, including the swearing-in of new members, has come to a halt until the speakership is determined.

The continued stalemate has infused even routine votes, like the vote on whether to adjourn the House until Thursday, with unusual drama. There was shouting, arguments and confusion on the floor of the House on Wednesday night, as Democrats voted to block the Republican move to adjourn, with the goal of forcing McCarthy into facing a fourth unsuccessful vote in a single day. Democrats lost that effort by only a handful of votes, a possible sign of more struggles to come as a divided Republican party takes their narrow majority in the House of Representatives, after a smaller-than-expected series of wins in the midterm elections.

The tension in the House chamber seemed to ratchet up on Wednesday as the votes stretched on. Nominating McCarthy for the sixth ballot, congresswoman Kat Cammack claimed without evidence that Democrats had been drinking alcohol during the speakership election, prompting boos from the other side of the aisle. When Republican congressman Scott Perry stood to nominate Donalds, Democrats jeered him over his alleged involvement in efforts to overturn the 2020 presidential election.

“I just think it’s a little embarrassing it’s taking so long,” Biden said before leaving for a trip to Kentucky. “It’s not a good look, it’s not a good thing. This is the United States of America, and I hope they get their act together.”

Many House Democrats reveled in the dysfunction. Several Democratic members tweeted out photos of themselves enjoying popcorn as the floor fight unfolded on Tuesday. Congressman Jimmy Gomez, a Democrat from California who brought his four-month-old to the Capitol for a swearing-in ceremony that has still not happened, tweeted a photo of his son: “Two bottle feeds and multiple diaper changes on the Democratic cloakroom floor. This speaker vote is taking forever!”

In his floor speech, Gallagher acknowledged the chaos that has consumed the election so far and lamented the party’s narrow majority. Trying to put a positive spin on the situation, he celebrated the intra-party tension as the result of vigorous debate.

“The American people gave us an opportunity,” he said. “They’re asking us to do a job, and nobody has laid out a plan – a proactive policy agenda for the direction we want to take this country – in more detail than Kevin McCarthy.”

Before the chamber convened on Wednesday, Trump offered McCarthy his full-throated endorsement, despite offering a more equivocal stance on McCarthy’s leadership the night before.

“VOTE FOR KEVIN, CLOSE THE DEAL, TAKE THE VICTORY,” Trump said in a post on the social media platform Truth Social, warning that a failure to do so would result in a “GIANT & EMBARRASSING DEFEAT”. But his declaration did little to change the minds of the conservatives dug in against McCarthy, some of whom are the former president’s staunchest allies on Capitol Hill.

Other prominent Trump loyalists, including the Georgia congresswoman Marjorie Taylor Greene and Ohio congressman Jim Jordan among them, have joined the former president and rallied around McCarthy and called on their conservative colleagues to join them.

The continued chaos came after the first three votes held on Tuesday failed to produce a winner. Across those three ballots, the ranks of McCarthy’s Republican detractors only grew, reaching a total of 20 by the time the chamber adjourned on Tuesday evening.

After demanding a number of changes to chamber rules, one anti-McCarthy lawmaker suggested the leader’s handling of policy was to blame for his poor standing among certain conference members. Scott Perry, chair of the House Freedom Caucus, specifically cited the passage of the omnibus government funding bill last month, even though McCarthy fiercely opposed the legislation.

READ ALSO:   Buhari Is Clueless, He Should Step Aside Immediately – Miyetti Allah

McCarthy “is falsely selling the media he’s conceded to us in the Rules – not ONE bit will do ANYTHING to stop what just happened in the massive $1.7tn, 4,000-page taxpayer theft bill from 12 days ago”, Perry said on Twitter. “We’ll continue to seek a candidate who’ll put an end to this horrible practice.”

Underscoring the acrimony between the rival Republican camps, Gaetz sent a letter to the building caretakers on Tuesday night suggesting that McCarthy was improperly occupying the speaker’s lobby.

“What is the basis in law, House rule, or precedent to allow someone who has placed second in three successive speaker elections to occupy the Speaker of the House Office?” Gaetz wrote. “How long will he remain there before he is considered a squatter?”

As the Republican conference devolved into chaos, House Democrats rallied around their new leader. Jeffries, who on Tuesday became the first Black American to helm either major party’s House caucus, said Republicans’ failure to elect a speaker was a “sad day” for the institution and democracy.

“This is a crisis of the Congress and it’s a crisis at the hands of the Republican dysfunction,” California congressman Pete Aguilar, the House Democratic Caucus chair, said at a Wednesday morning press conference. Aguilar said Democrats were united behind Jeffries, whom party members emphatically nominated as their choice for speaker.

Due to the conservative defections, Jeffries won the most votes overall on each of the first six ballots, but he fell short of the 218 needed to be elected speaker.