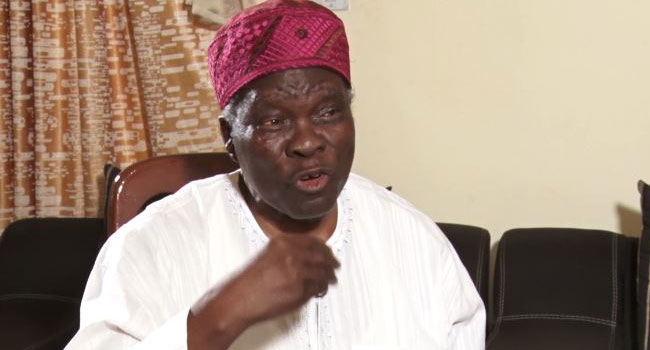 Sequel to the incident at the Ojota rally on Monday by Yoruba Nation agitators, the leader and Chairman, Ilana Omo Oodua Worldwide, Banji Akintoye has returned to office.

CityNews reports that Akintoye, in a statement on Wednesday titled “My humble response to the request that I should withdraw my letter of resignation,” said he has withdrawn his resignation letter from the leadership of the group and returned to office.

According to him, when he tendered his resignation letter three weeks ago, he made it clear that it was for him to trim off his responsibilities in Ilana due to age and devote his energies to pressing challenges in the higher spheres of the Yoruba self-determination struggle.

The development follows a clash between the Yoruba nation agitators and some men of the police force on Monday in Ojota, Lagos State, which resulted in the death of one person.

Hitherto that incidence there has been crisis rocking the leadership of the group over allegations of fraud and embezzlement which led to the resignation of the immediate leader and Chairman, Wale Adeniran, a move that wasn’t welcomed by some leaders of the organisation.

However, Akintoye in yesterday’s statement submitted that “Three weeks ago, I wrote to inform Ilana Omo Oduduwa that I was resigning from my leadership position in the organisation. I made it clear that my resignation was due only to the need for me at my advanced age to trim off my responsibilities in Ilana to devote my energies to pressing challenges in the higher spheres of our Yoruba self-determination struggle.

“Since then, I have received, from all sections of Ilana, messages or letters rejecting my resignation and urging me to continue to make the sacrifice of leading Ilana. In the past week, I have been visited for the same purpose by leading persons representing the Elders Advisory Council, the Ilana Secretariat, and the two formerly differing sections of Ilana.

“I have also had the honour of being visited by Peter Bamgbade who is recognised in the whole Yoruba nation as a major influence for reconciliation and harmony among Yoruba people.

“I hereby give up my earlier resignation decision, and announce my return to my leadership position and role in Ilana.

Advertisement
READ ALSO:   US President, Joe Biden In Fresh Trouble As 120 Retired Military Officers Pass Vote Of No Confidence on His Mental Health

“As I now return, I expect cooperation, mutual respect, brotherliness and disciplined conduct from all our members at home and in the Diaspora. As a disciplined self-determination organisation crucial to the realisation of our collective resolve to exit the contraption called Nigeria, there is an immediate need to harmonise and unify all the tendencies in IOOW.

“I hereby use this opportunity to announce the dissolution of all IOOW factions largely brought about by infiltration of our rank and file by adversaries within and without.”