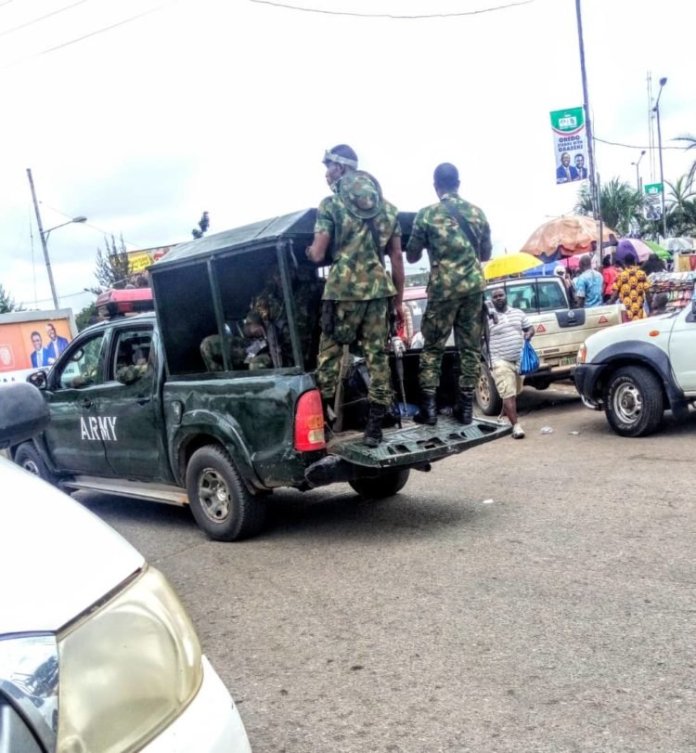 CityNews Nigeria reports that NAOSRE has commended security operatives who were on ground at the just-concluded Edo governorship election.

Skirmish here and there notwithstanding, the National Association of Online Security Reporters, NAOSRE has commended security operatives assigned to the Edo State governorship election which held on Saturday, September 2020.
The commendation came in a statement signed by NAOSRE’s Acting President, Favour Benson who noted that officers and men of the Nigeria Police, Nigeria Army, Civil Defence and other security agencies exhibited an appreciable degree of professionalism in maintaining laws and orders during and after the election.
She praised the security operatives for maintaining relative neutrality before, during and after the election.
Benson said: “We applaud the security operatives for their fairness and relative neutrality in the conduct of the elections. NAOSRE observed that security agents resisted the temptations to be manipulated into subverting the clearly expressed will and wishes of the people of Edo State.
“In the same vein, NAOSRE congratulates Deputy Inspector General of Police, Adeleye Oyebade for leading successful security operations in Edo which has been adjudged by international observers as peaceful and fair.”
However, Benson reinstates NAOSRE’s advocacy on the basis that electoral security must be human-centered in line with the association’s mission to support citizens’ freedom to participate in free and fair elections.
“Security agents must therefore, develop a more holistic approach to security coverage of all phases and activities of electoral process that conforms to international standards and norms governing elections.
“Ahead of Ondo October 10 governorship, we call on President Muhammadu Buhari to support training and funding of security operations that will generate an improvement in electoral conflict prevention, mitigation and resolution as rooted in international instruments and standards.”
Benson maintained in the statement that the association remains committed in developing media skills to foster dialogue and cooperation on nonpartisan projects by promoting social harmony and a nonviolent political culture. “NAOSRE will continuously identify root causes of electoral violence and offer media supports to diffuse tension where possible for a better Nigeria,” Benson said.