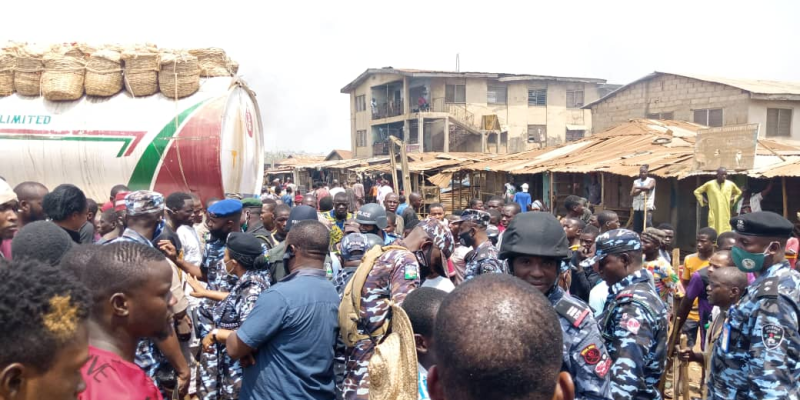 The O’odua Peoples Congress (OPC) has asked President Muhammadu Buhari to investigate the clash between Yoruba and Hausa in Shasha community in Akinyele Local Government Area of Ibadan, Oyo State.

CityNews Nigeria recalls that three people were reportedly killed in a clash between Hausa speaking people and the Yorubas at Shasha Market.

It was learnt that the disturbing event led to the destruction of shops and properties by hoodlums who took advantage of the clash. It was reported that residents were forced to flee the troubled area around 5:30 pm last Friday.

Some lucky residents were said to have hurriedly picked a few clothes with them as they were unsure whether the violence would not escalate. Confirming the report to newsmen, police operatives revealed that one person died in the attack, contrary to the claims by traders.

Reacting in a statement by its spokesperson, Yinka Oguntimehin, the OPC expressed surprised that the avoidable clash was caused by a minor misunderstanding between a pregnant woman and a Hausa man.

“It is unfortunate that a short misunderstanding between two traders eventually led to killing and destruction. Yoruba are every where in Nigeria, especially, in the North, mostly in Kano and Kaduna, however, it is on record that no Yoruba native has ever instigated any crisis in the north,” he said.

“Therefore, I am using this opportunity to call on President Muhammadu Buhari to investigate the circumstances surrounding the ugly incident, so as to bring the culprits to book and also forestall further crisis.”

Amotekun
The OPC also condemned the shooting of an Amotekun operatives for arresting a Fulani herdsmen by the Divisional Police officer in charge of Ile-Igbon Division, Surulere LGA of Ogbomoso in Oyo State, Adepoju Ayodeji.

“The police officer should be made to face the music for shooting an Amotekun corp.No matter who was involved and the circumstances surrounding the incident, the police boss should be professional enough to know when to pull the trigger.

“It is a grave error of judgment for such a senior officer of the police to shoot an Amotekun corp knowing full well that the southwest security outfit was backed by the law,” Oguntimehin said.

Ooni of Ife Unveils Face Of His New Prince

Meghan Markle’s Letter To The Palace About Kate Middleton Surfaces