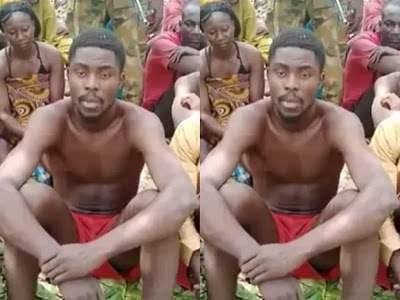 Kidnapped students of the Federal College of Forestry Mechanization Kaduna, have appealed to the Government not to use force to rescue them as their captors warned that such moves would lead to the killing of all the students.

Benson Emmanuel, one of the students who spoke in a video that went viral on Saturday, said that they were surrounded by the gunmen who threatened that none of them would leave alive once the security agents attempt to rescue them by force.

Emmanuel, who sat on the ground together with the other abductees, both males and females, said they needed urgent help as all of then were faced with health issues.

“They have surrounded us, saying anybody who comes to rescue us by force, they are going to take our lives,” he said.

He said the students were injured badly and appealed to the government not to waste much time in rescuing them from the gunmen.

” They have bad mind against us, we are appealing to government to settle this early” he said.

Similarly, a female student also spoke in Hausa, repeated what Emmanuel had said in the video.

The students looked so dejected and terrified in the video, with no tops but only trousers for the males and wrappers for the females.

The gunmen whose heads were concealed in the recording were seen in military uniform pointing their guns at the students, as they were forced to speak.

In another video, the students were recorded crying and begging for leniency, as some of the gunmen moved around flogging them with whips.

They were also appealing to the authorities to rescue them, amidst sobs.

The students were all gathered in a bush with fewer trees or vegetation cover. The gunmen were speaking in Hausa language, intermittently, which was heavily accented and suggested they might be from the neighbouring countries.

JUST IN: Another Police Station Burnt By Hoodlums In Imo

R. Kelly allegedly attacked by another inmate inside Chicago Prison