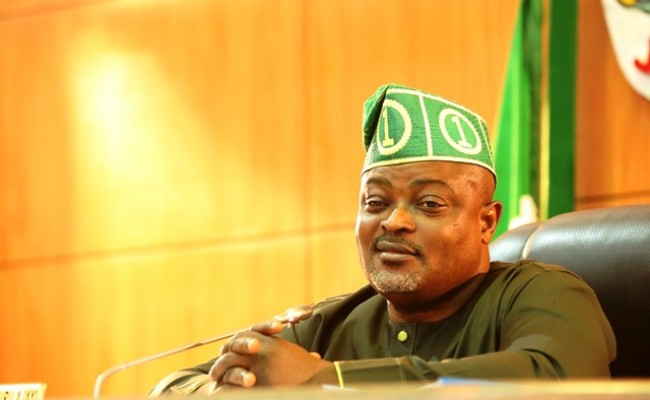 – Encourages state speakers to remain firm on demand for autonomy

– Says without legislature, there is no democracy

The Lagos State House of Assembly has called on the Nigerian Governors Forum to recognise and activate the Executive Order 10 signed by President Muhammadu Buhari in May 2020 granting full-scale autonomy to state legislatures and judiciary.

The House also commended the striking members of the Judiciary Staff Union of Nigeria (JUSUN) and Parliamentary Staff Association of Nigeria (PASAN) for remaining resolute on ensuring that the two arms of government enjoy autonomy.

Speaker of the House, Rt. Hon. Mudashiru Obasa, who presided over the day’s plenary, appreciated the lawmakers for contributing to the debate raised under ‘matter of urgent public importance’ by Hon. Gbolahan Yishawu (Eti-Osa 2).

“I commend PASAN at the Lagos State House of Assembly for permitting us have our own sittings in this hallowed chamber. I sincerely commend the boldness and sincerity of purpose of both PASAN and JUSUN.

“Looking back, I thank and commend the 2003 legislators of this Assembly for initiating the bill that granted us autonomy. I also commend the Governors of Lagos State from Asiwaju Bola Ahmed Tinubu to Mr. Babajide Sanwo-Olu for sustaining the autonomy for the legislature in the State.

“Lagos is not the only State enjoying autonomy for legislature currently, Delta State has been granted autonomy.

“We want to use this medium to call on all state governors through the Nigeria Governors Forum (NGF) to speed up their considerations and implement the full scale financial autonomy.

‘We also call on the State Houses of Assembly through the Speakers Conference to be bold and do what is right and in the eye of the constitution.

“We are talking about restructuring and devolution of power, but these should start from the states.

“Devolution of power and restructuring should start from home. If that is not done it would be wrong to start telling the Federal Government to share power to states. We appeal to the Governors Forum to start working on the autonomy for the legislature and the judiciary,” Speaker Obasa said noting that without the legislature there is no democracy.

Raising the motion earlier, Hon. Yishawu urged his colleagues to call on the Conference of Speakers to have the political will to defend their autonomy.

While praising Lagos for ensuring autonomy for the legislature, Yishawu described the action of JUSUN and PASAN as geared towards strengthening democracy.

He said the governors had nothing to fear about the autonomy being demanded.

Contributing, Hon. Desmond Elliot (Surulere 1) noted that the industrial actions embarked upon by JUSUN and PASAN are in order as lack of autonomy would weaken the other arms of government.

On his part, Hon. Victor Akande (Ojo 1) said
it was appalling to subject any arm of government to ridicule or to the whims and caprices of another arm like it is with the legislature and executive of some states.

He recalled President Muhammadu Buhari’s directive that funds should be deducted from source for states that failed to implement it.

Hon. Femi Saheed (Kosofe 2) argued that the legislature and the judiciary have rights to be independent of the executive as it would make them work effectively.

Leader of the House, Hon. Sanai Agunbiade (Ikorodu 1), noted that the budget of a state includes what should go to the other arms of government aside the executive. He, therefore, wondered why the legislature and the judiciary would be denied financial autonomy.

He lamented the impact of the strike actions in the affected states.

Hon. Rasheed Makinde (Ifako/Ijaiye 2) described autonomy as a constitutional matter that is not even supposed to be debated.

He said that it was wrong for anybody to deny the arms of government what they deserved.

For Hon. Setonji David (Badagry 2), “the former American President, Donald Trump did not want to leave office, but the country has strong institutions. The governors should free the legislature and the judiciary.”

Also speaking, Hon. Abdulsobur Olayiwola Olawale (Mushin 2) recalled how the autonomy for the two arms of government was influenced by Speaker Mudashiru Obasa while he was the Chairman of Conference of Speakers.

He noted that separation of power could only come when the three arms of government are independent.

Hon. Olumuyiwa Jimoh (Apapa 2) said what the other arms currently suffer was initiated by the military.

I won’t fold my arms any longer, I’ll reply every attack on my person –...

Drama As Police Reveals Kano’s Bride-To-Be Was Not Kidnapped, She Disappeared