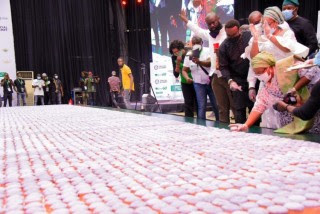 Nigeria has entered the Guinness Book Of World Records for celebrating her 60th Independence Anniversary.

CityNews Nigeria reports that the Lagos State  celebrated the 60th Independence Anniversary of Nigeria with 60,000 cupcakes to produce the largest anniversary logo in the world. READ ALSO:11-Year-Old Raped To Death In Lagos

The initiative puts Nigeria in the Guinness Book of World Record as holder of the world’s largest anniversary logo made with cupcakes.

The Lagos State Governor, Mr Babajide Sanwo-Olu, while speaking at Teslim Balogun, Surulere, venue of the event, said the state through the laying of the largest cupcake mosaic, sent a message to the world that Lagos is a land of creativity and innovations. 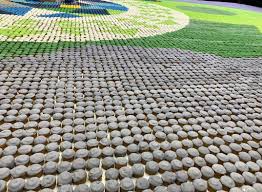 Sanwo-Olu, who was represented by the wife of the state Deputy Governor, Mrs Oluremi Hamzat, at the event monitored by officials of the Guinness World Records, disclosed that the last largest cupcake logo in the world had 30,400 cupcakes and was made in Singapore in 2015.

“It is my belief that Lagos State and indeed Nigeria will continue to strive and record greater achievements,” the governor added.

The Commissioner for Tourism, Arts and Culture, Uzamat Akinbile-Yussuf, said through the event, Lagos was putting itself before the international community, especially tourists, to see what the state could offer in terms of creativity.