A woman allegedly killed her mother and chopped the body into pieces in Ikot Ekpene, Akwa Ibom, IgbereTV reports.

Abasi-Ifreke Ime Eshiet who posted the photos from the crime scene said that the shocking incident happened at Urua Anan Road, Ikot Ekpene.

Some of the photos show the suspect carrying the body pieces in a bowl before she was tied up and bundled into a police van. 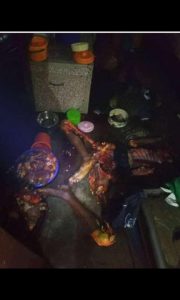