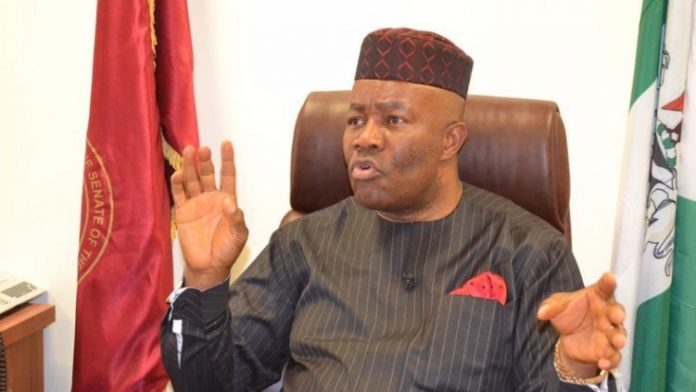 The Minister of Niger Delta Affairs, Senator Godswill Akpabio on Wednesday came under serious knocks for trying to blackmail the Nigerian Senate for daring to investigate the whopping N40 billion NDDC fund that allegedly disappeared into thin air in a few months.

The Senate in its reaction to allegations of witch-hunting levelled against the upper and lower chambers of the National Assembly declared that no amount of blackmail would deter their investigations.

This is as it fingered the Minister of Niger Delta Affairs, Senator Godswill Akpabio as fuelling the crisis between the National Assembly and the NDDC .

Addressing journalists on the festering crisis, the Chairman, Senate Committee on Niger Delta Affairs, Senator Peter Nwaoboshi ( PDP Delta North), said all allegations levelled against the National Assembly by the Acting Managing Director of the Commission, Kemebradikumo Pondei and the ones personally directed at him by the Executive Director, Project, Dr. Cairo Ojougboh, were nothing but mere fabrications.

While the Acting Managing Director of NDDC in Port Harcourt on Tuesday alleged amongst others that the National Assembly inserted over 500 projects into the 2019 budget of the agency and is arm twisting the IMC from carrying out a forensic audit as directed by President Buhari, Cairo Ojougboh also alleged among others that some Senators got over 1000 contracts from the NDDC.

Pondei further claimed that the “overbearing stranglehold” of the National Assembly panels was responsible for the delay in the passage of the 2019 budget in March 2020.

He said the reason the NDDC applied to the National Assembly for the virement of its 2019 budget was “because the commission only got the letter of approval of the budget on March 20, 2020, after the NDDC was coerced by some lawmakers to pay 20 contractors.”

But in his reaction to all the allegations at a media briefing in his office, Senator Nwaoboshi said the ongoing probe exercise on finances of the Commission by both Chambers of the National Assembly, triggered the open media attacks against the National Assembly by the IMC.

He said: ” We are responding to the allegations of the IMC to correct the misrepresentation. If they claim that some 1000 jobs were given to any Senator, we challenge the IMC members to compile the list of these contractors and publish them.

“Also, the EFCC, Police or ICPC should be reached to investigate those claims instead of blackmailing anybody”

Vowing that both the Senate and the House of Representatives Committees would forge ahead with their separate investigations, Nwaoboshi said: ” What we are seeing is a case of a man sent to catch the thief but instead of catching the thief, he starts stealing too.

“If members of the IMC know that their hands are clean, they don’t need to panic or resort to blackmail which would not in any way deter the already mandated investigative committees of the National Assembly from carrying out their legitimate assignments.

“Their lies have short legs and unfortunately cannot run fast or fly. IMC must be ready to submit itself for a thorough investigation by committees already assigned for that by both Chambers of the National Assembly.

“The allegations of Balkanisation of the budget just came because the IMC members were asked to appear before the Ad Hoc-committee to answer questions.

“The National Assembly has the right to appropriate and carry out oversight functions on the Niger Delta Ministry, and the NDDC. So, no amount of intimidation or blackmail will stop us”, he said.

The committee also explained that the National Assembly refused to treat the request to amend the 2019 budget of the NDDC because there was a breach of the procedure for requesting a budget amendment or virulent.

“If the President sends it, we will consider it. As it stands, there is nothing before the National Assembly” the committee insisted.

Senator Nwaoboshi disclosed at the press briefing that despite being a former colleague, he had deleted the number of the Minister of Niger Delta Affairs, Godswill Akpabio from his phone for allegedly fuelling the crisis between NDDC and the National Assembly.

According to him, Akpabio as a member of the Senate Committee on Niger Delta Affairs over sighting the NDDC, in 2017 alone, requested for 500 million worth of projects to be captured in the agencies capital votes for the fiscal year and now surreptitiously instigating IMC members of the agency against the National Assembly.