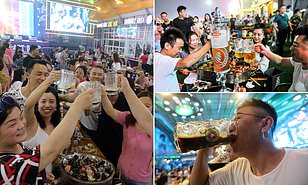 Thousands of Chinese beer lovers left their face masks and virus worries behind to gather in large crowds and raise a much-needed glass as the largest booze festival in Asia opened.

China has largely brought the coronavirus outbreak under control through a series of lockdowns and restrictions, and the small number of cases reassured beer-lovers to turn out at the annual Qingdao beer festival despite the global pandemic.
At the festival, which opened on Friday and will run until late August, drinkers were eating and drinking together, watching shows and fireworks and sampling the more than 1,500 types of beer available.
Many revellers were walking around the enormous venue in Shandong province mask-free, with long tables packed with merry drinkers in scenes reminiscent of pre-COVID-19 days.
State broadcaster CCTV said the festival was a chance for people to go back to ‘normal life and clink glasses’. 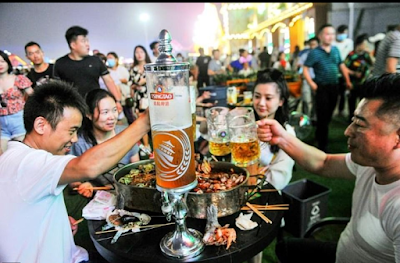 ‘It’s been half a year since I last travelled around… I feel so happy and relaxed right now,’ Wang Hua, a tourist from northern Shanxi Province, told CCTV.
But all was not entirely as normal.
The central ‘Beer City’ is limited to 30 per cent visitor capacity, while staff must wear masks and visitor temperatures and health codes are checked.
The Qingdao festival is the largest of its kind in Asia and one of China’s biggest tourism events, according to China Daily.
Although it is held in summer every year, its high popularity has led it to be called Asia’s Oktoberfest. 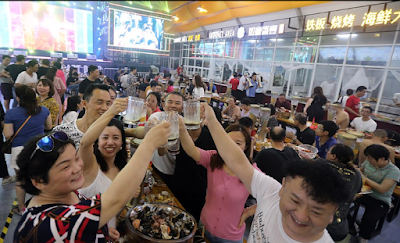 Last year, the month-long event reportedly welcomed 920,000 domestic and international visitors, who downed 1,100 tons of beer.
Imported beer containers are also being tested for the virus and disinfected before entering the venue, officials said, after several local clusters in China were linked to imported food.
The seaside resort is the home of Tsingtao, one of the most popular beers in China and the most exported around the world.
The brewery was set up while Qingdao was under German colonial rule between 1898 and 1914.
China has seen a new spike of infections in the north-western province of Xinjiang and the north-eastern city of Dalian. Both regions have used draconian measures to fight the disease.

Breaking: One Feared Shot In Edo