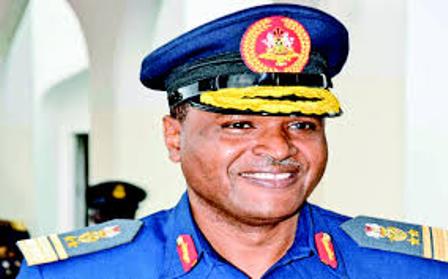 The Chief of Air Staff (CAS), Air Marshal Sadique Abubakar, says NAF personnel will continue to fight against banditry until citizens are able to go about their daily activities and live freely.
Abubakar gave the assurance during the inauguration of one block of 20 flats airmen transit quarters and internal road networks at 271 NAF Detachment on Wednesday in Birnin Gwari, Kaduna State.
“We must continue to fight until our beloved citizens are able to go about their daily activities and live freely.
“It is our obligation to professionally perform our roles to protect our dear country from both terrorism and militancy.”
According to Abubakar, this is in  pursuit of NAF’s  constitutional roles, and in line with his vision for the service.
“I have constantly sought not only to evolve strategies that will  enable the service adequately project air power to effectively and efficiently deal with prevalent security threats, but to also see that personnel welfare is treated with utmost priority.”
Abubakar said  it was noteworthy to recognise the crucial role of 271 NAF Det Birnin Gwari in arresting the dynamic security challenges within its areas of responsibility.
“This further buttresses the need for a robust structure that can conduct single and joint operations in concert with other surface forces as well as provide the needed support towards combating insecurity.
“It is in recognition of this pivotal role that the welfare of human component of our security architecture must be prioritised,” he said.
He added that the Nigeria Air Force (NAF) would  continue to put in place facilities that would ensure the comfort of personnel and enhance their operational efficiency.
“It is no gain saying, that our air offensives against banditry in the ongoing military campaigns in Niger, Kaduna, Zamfara, Katsina and Sokoto states have so far, contributed greatly to the achievements of the Armed Forces of Nigeria.
“However, this is not the time to relent. I am happy to know that this unit neutralised some bandits on  Tuesday, July 7,  while carrying out its constituted assigned tasks,” he said.
The air chief appreciated President Muhammadu Buhari for his unending support to NAF toward the achievement of its statutory mandate.
He reassured all Nigerians that NAF remained more committed to ensuring a safer and more secure Nigeria.
Earlier,  the Air Officer Commanding (AOC), Special Operation Command, AVM Charles Ohwo, said the current NAF leadership has placed high emphasis on personnel welfare and capacity building.
Ohwo said this had greatly enhance personnel performance, morale and service delivery.
“Therefore, I reassure you of our dedication and unalloyed commitment to ending insurgency and banditry across our sphere of influence,” he said.

Igbo will be president in 2023 – Ohanaeze

What Insecurity Is Thriving On – CAN Reveals