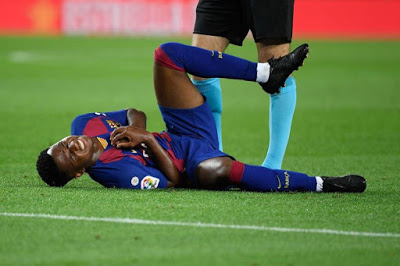 Barcelona’s Ansu Fati could be set for a significant spell on the sidelines, after he suffered a serious knee injury during Barcelona’s 5-2 victory over Real Betis on Saturday.

Barcelona confirmed that Fati did not come on for the second half after picking up an injury to his left knee, and could be out for a while.

The 18-year-old played the opening 45 minutes for La Blaugrana but was substituted at half-time by Ronald Koeman, who introduced Lionel Messi in his place.

Messi went on to turn the game in favour of his side netting a brace and helping his side run out hefty winners.

Fati’s injury is described as an ‘internal meniscus injury’ to his left knee, a blow that could leave the winger out of action for several months.

Odemwingie Calls Out Amara Kanu For Chasing Him With Text Messages