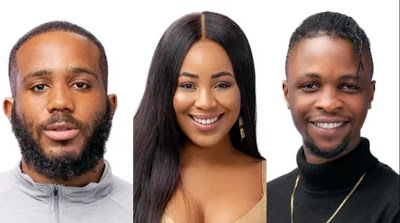 BBNaija Housemate Laycon who expressed his undying affection for fellow Housemate, Erica, has revealed that he would not make her jealous by moving on to someone else.

The three housemates -Kiddwaya, Erica and Laycon are in a love triangle as Erica keep switching between Laycon and Kiddwaya.

During a chat with Kaisha, Laycon said he prefers to remain in the House to continually see Erica even though they might not be talking to each other.

He said Erica and other Housemates are worth much more than N3million to him.

Laycon further said he wasn’t sure he would move on with another girl in the House as long as Erica is there.

“It’s stupid to switch feelings, if I decide to move on with someone else that means I’m trying to make Erica jealous and that looks so stupid,” he told Kaisha.

Laycon, Erica, and Kiddwaya have been involved in a love triangle that has kept viewers glued to their TV sets

US: Small-Business Failures Loom as Federal Aid Dries Up