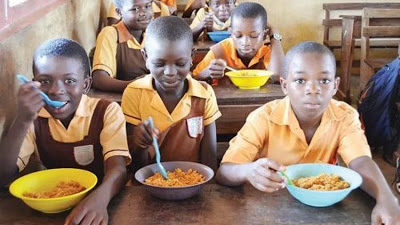 Insistence by the Federal Government to continue its homegrown school feeding programme, even when schools in the country are currently shut down due to the coronavirus pandemic, may not only fail abysmally, but become a drain pipe on the lean resources of government at this point in time.

This is the position of some stakeholders in the education sector such as the National Association of Nigerian Students, NANS, the Nigeria Union of Teachers, NUT, Concerned Parents and Educators, CPE among others.

They made their positions on the matter known while speaking with Vanguard, basing their fears on workability of the logistics needed to take food to the homes of pupils since people are not allowed to congregate in large numbers because of the pandemic.

This is just as it was gathered that government claims to be spending the sum of N679 million daily or N13.5 billion monthly on the project in 31 states of the federation including the Federal Capital Territory, Abuja.

According to the South-West Coordinator of NANS, Comrade Kappo Samuel Olawale, given the situation in the country, the plan is not realistic.

“The plan is not realistic at all. To me, it is a huge prank and a costly one for that matter. How many houses will the food vendors cover since schools are not in session and pupils cannot congregate at a point?

“If they ask the vendors to go and supply the food rations to the pupils at home, it is not that the beneficiaries are living at a spot or a particular place. Even if that is possible, it will increase the cost of logistics.

“Also, if you are asking the pupils to go to a particular place to collect vouchers for the food or even collect the food, there is no doubt the situation will become rowdy and the large gatherings we want to avoid will present themselves, the process would eventually be hijacked by others.

“Why can’t they feed the parents and the parents feed their wards? The other time palliatives were to be given people, the process was badly coordinated. The truth is some people just want to make money for themselves,” he said.

Reacting, Lagos State Chairman of Nigeria Union of Teachers, NUT, Otunba Adesina Adedoyin, who spoke in a similar manner, wondered why pupils in private schools were not included in the programme from the beginning.

“As a teacher, I know that our pupils and students live in different communities. In Lagos, some people live in Ikorodu and run businesses and shops on Lagos Island and, thereby enrol, their wards in schools close to their business premises. How easy will it be to now take food meant for such students to their home addresses?

“The logistics the government would need to implement this would definitely not be Nigerian,” he said.

Founder, CPE, Mrs Yinka Ogunde, asked whether government has data on the pupils.

“I don’t know the level of their preparedness when one talks about logistics as that would inform the workability or otherwise of their plan. The logistics must be well thought-out. We must be careful not to create a bigger problem while trying to solve one,” she opined.

“The policy of feeding children or school pupils at home is just a sham and a smokescreen aimed at deceiving the populace.”

Also reacting, Evans Ufeli, Executive Director, Cadrell Advocacy Centre, said: “This government should stop embarrassing Nigeria. They can just keep quiet, the children aren’t complaining and the parents are trying their best. It’s disrespectful and insulting to the children and their parents if government dishonestly continues to keep and hold this conversation.”

Recall that the Minister of Humanitarian Affairs, Disaster Management and Social Development, Sadiya Umar Farouq, in the last few days, had been harping on government’s insistence to continue the homegrown school feeding programme, even when schools are shut down.

Last Saturday, she reiterated the decision while distributing relief materials to some people in Karimajiji, Abuja.

She said Lagos, Ogun, FCT and later, Kano, would be where the exercise would start, adding that vendors would take the food to pupils’ homes door-to-door with vouchers allocated at specific collection times to avoid overcrowding.

She added that vouchers would be redeemed at designated distribution centres and that 3.1 million households would benefit.

“It is in that place where we are going to keep the food rations that we will distribute the vouchers and then they will come to pick up their own ration,” the Minister said.

When vanguard correspondent sought to know how prepared Lagos State is for the exercise from the Education Commissioner, Mrs Folashade Adefisayo, she neither picked her calls nor replied a text message sent to her.

“I Will Rape You” – Man Tells Female Electricity Official Who Cut His Wire, Then...

Why I converted from Islam to Christianity – Actor, Bolanle Ninalowo