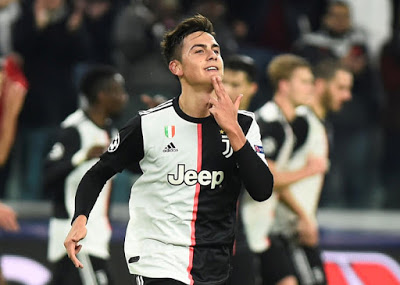 Juventus will be without central defender Leonardo Bonucci and midfielder Paolo Dybala for the first leg of their Champions League round of 16 tie against Porto, coach Andrea Pirlo said on Tuesday.

Pirlo also told an online press conference that Welsh midfielder Aaron Ramsey will return to the squad for Wednesday’s game in Portugal.

“Ramsey is available, Dybala is not ready and Bonucci is out,” Pirlo said.

Juventus had already announced that Colombian winger Juan Cuadrado would miss the game after suffering a thigh injury.

Argentine Dybala, out since mid-January with a knee problem, has resumed training but “is not ready to play”, Pirlo said.

“We’ve missed Dybala’s goals a bit and we haven’t had him available often, we hope he can find continuity and he will be like a new signing,” Pirlo said.

Bonucci, the coach said, was “already not right” last week, has had “another small physical problem” and is “not available”.

Both Dybala and Bonucci will make the trip to Portugal “because they all want to be close to the team,” said Pirlo.

Sad! How Dad, 21, ‘takes own life after struggling with #coronavirus lockdown’

Why IG ordered withdrawal of police officers in EFCC