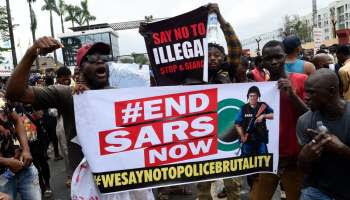 The police have taken over the popular Afrika Shrine to prevent a meeting on #EndSARS from being held there.

Seun, one of the sons of Fela Anikulapo-Kuti, Afro Beats maestro, had earlier distributed handbills announcing a meeting on the lessons from #EndSARS protests.

But the police later wrote to the Anikulapo family, calling for the suspension of the meeting scheduled to hold at the shrine, a boisterous relaxation spot.

Seun had shared snapshots of the letter on social media.

“You are hereby warned to suspend such gathering as any infraction that may emerge from this gathering will be tagged a deliberate action to sabotage the transition and restoration of the peace in Lagos State by the Lagos State Government and the Nigeria Police Force,” the letter read.

On Tuesday, mobile policemen mounted strategic locations across the shrine while their vans were parked right in front of the relaxation spot.