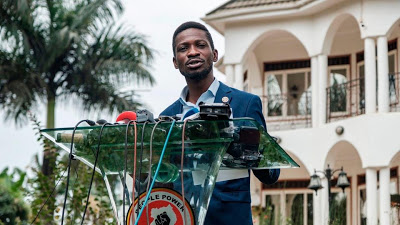 Uganda Politician, Robert Kyagulanyi Ssentamu, popularly known as Bobi Wine, has raised an alarm over military invasion of his home.

Bobi Wine alleged that his home is under siege by the military.

In a series of tweets on Friday, the presidential candidate claimed that military officers scaled through a fence into his residence.

According to Bobbi Wine: “We are under siege. The military has jumped over the fence and has now taken control of our home.

“None of these military intruders is talking to us. We are in serious trouble. We are under siege.”

Bobbi Wine, an opposition leader, is the leading contender against the country’s President, Yoweri Museveni.

The 76-year-old Museveni, who has been in power since 1986 is currently leading the ongoing presidential election.

Nigeria At The Risk Of Another Covid-19 Explosion – NCDC

COVID-19:Israeli $1.5M Gold & Diamond Face-Mask Is The Most Expensive In The World(PICS)